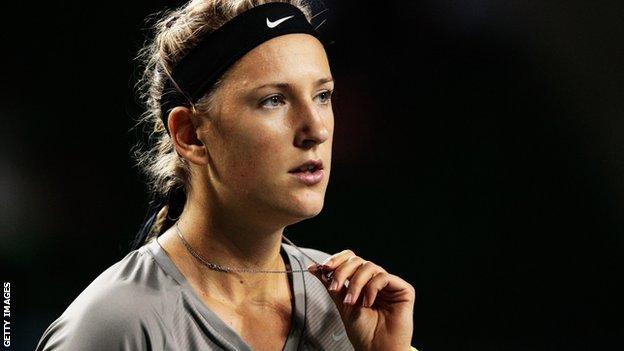 The world number one appeared to be feeling unwell at 3-3 and had treatment on court, but came out firing.

Azarenka raced to a 6-4 6-2 win to set up a quarter-final against Germany's fifth seed Angelique Kerber.

Second seed Maria Sharapova, who beat Heather Watson in the previous round, saw off Lucie Safarova 6-2 7-6 (7-5).

"After the long match yesterday, I'm very happy to be able to win today," said the Russian, who won the title in 2005 and 2009. "I was a little bit down in the second set and I'm just happy to win in two sets."

In the final match of the day, Azarenka received courtside medical attention, which included a blood pressure test midway through the first set, but recovered to win the next three games and with it the set.

"I felt dizzy on the court and my head was spinning in between points, which made it difficult to focus," she said.

"What exactly it is, I don't know. I am still trying to figure it out. Hopefully, I'll know as soon as possible and get rid of it."

"After the first set of my first match, my energy level dropped, but since then I've been feeling great," said Wozniacki, the 2010 champion.

"Today Li Na was playing very close to the baseline and pushing me away, taking the balls very early - she was all over me. But in the second set I really started to step in and push her away."

In Beijing, British number one Laura Robson has been drawn against Spain's Garbine Muguruza for Friday's first round of qualifying at the China Open, while Heather Watson will play Chinese wildcard Ran Tian.