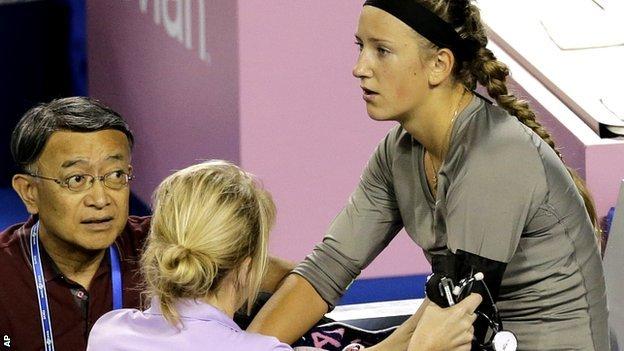 World number one Victoria Azarenka withdrew from the Pan Pacific Open in Tokyo ahead of her quarter-final against fifth seed Angelique Kerber.

The Belarusian, who had during her win over Roberta Vinci on Wednesday, said: "Maybe it was tiredness."

Sharapova broke first in both sets against Stosur and staved off four match points in the second set tie-break, but could not force a decider.

"Although I have a good record against her, she plays long and difficult," said Sharapova, who had won 10 of her previous 11 matches against Stosur.

"She's a steady player on the court, she's a difficult opponent. I could have returned better but she played a solid match today. She was much more consistent. It's disappointing to lose."

Azarenka, who won the Australian Open and became world number one in January, also made it to the US Open final earlier this month and admitted that the best season of her career might be catching up with her.

"Before the tournament I wasn't feeling very good," said the 23-year-old, who had her blood pressure checked during Wednesday's win over Vinci.

"I had low energy. I wasn't myself. It wasn't possible today. Maybe it was tiredness from the whole season. I need to have some tests. It's a little bit unknown what it is."