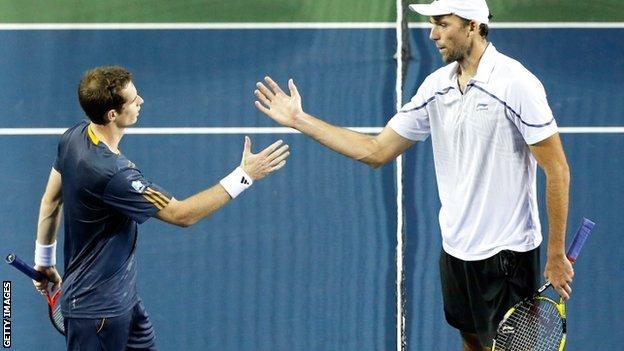 Andy Murray maintained his unbeaten run as he defeated Ivo Karlovic at the Japan Open in his first match back after winning the US Open.

The 25-year-old Briton got a workout in the first set against the towering Croat but edged a tie-break 9-7 with a running forehand down the line.

Next up for the defending champion is Slovakian Lukas Lacko.

I feel like I can concentrate better, take more responsibility for my performances in every tournament throughout the year

The Tokyo tournament is another key event for Murray, who is eager to round off his career-best season on a high.

The world number three beat Rafael Nadal from a set down in last year's final and is now building towards the end-of-season ATP World Tour Finals in London starting on 3 November.

The 25-year-old said in Japan that winning his first grand slam in New York has seen him re-evaluate his approach to each tournament.

"I was so, I don't want to say 'obsessed' with winning a grand slam, but it was so important to me," Murray said.

"Sometimes during the year in certain matches I haven't done myself justice. I felt after the US Open that I needed to reset some goals.

"I was always focusing on the next grand slam rather than every tournament and every match I played.

"Now I feel like I can hopefully concentrate better, take more responsibility for my performances in every tournament throughout the year."

It was a straightforward first-round win for Murray against Karlovic, who had only entered the Japan tournament as a lucky loser after Gael Monfils withdrew because of an injury.

The match was dominated by serves with Karlovic thundering over 16 aces, while Murray did not face a single break point.

Murray is also aiming to defend the doubles crown he won in Japan with his elder brother Jamie.