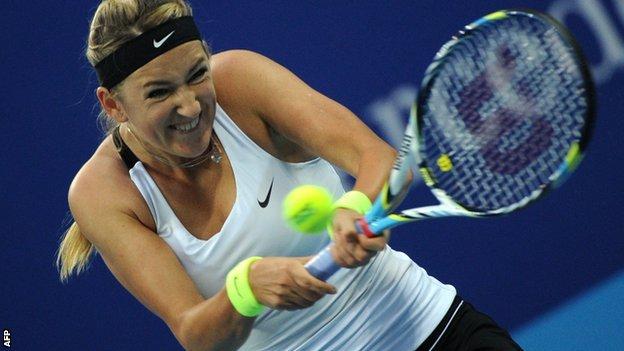 Victoria Azarenka and Maria Sharapova will meet in the final of the China Open after both eased to victories in their semi-finals in Beijing.

Jo-Wilfried Tsonga reached the men's final as he led 6-1 4-1 before Feliciano Lopez retired with an injury.

Top seed Djokovic has won the China Open on the two previous times he entered, beating Marin Cilic in the 2009 final and then defeating David Ferrer to clinch the title again a year later.

Of Tsonga, the Serb said: "We have played a lot of important matches on the big stage. He's a very powerful player, big serve, big forehand, and if that works, he can win against anybody on any surface."

Tsonga, who needed three sets to beat Denis Istomin in the first round, received a walkover in round two after Nikolay Davydenko withdrew before beating Russia's Mikhail Youzhny in straight sets in the quarter-finals.

"During this week my level has got better and better," Tsonga said.

"I have played some of my best tennis here. I haven't played like this in a couple of months, maybe a couple of years, and that's why I think I can win the final [on Sunday]."

Azarenka and Sharapova have met four times this year, with Azarenka claiming three victories, including successes in the final of the Australian Open and the semi-finals of the US Open.

Meanwhile, in the men's doubles semi-finals, British pair Colin Fleming and Ross Hutchins suffered a 6-2 6-3 defeat against the pairing of Carlos Berlocq from Argentina and Denis Istomin of Uzbekistan.