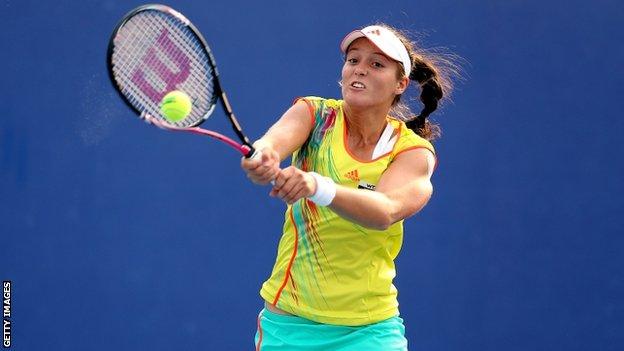 Britain's Laura Robson is through to the second round of the Japan Open after she beat Greek opponent Eleni Daniilidou 6-4 6-2 in Osaka.

The 18-year-old, ranked 56th in the world and seeded in a WTA tournament for the first time, saw Daniilidou recover from 3-0 in the second set.

But Robson held a tough service game, re-established her double break at 5-2 and served out at the first attempt.

She will face China's Yi-miao Zhou in the next round.

Robson is bidding to break into the top 50 after recent successes including and reaching the final of China's Guangzhou Open.

Number two seed Zheng Jie appeared on the verge of becoming the tournament's first major casualty when she trailed Spaniard Maria Jose Martinez Sanchez by a set and 5-2.

The 20-year-old and her 42-year-old partner, who are the fourth seeds, beat Canada's Eugenie Bouchard and American Alexa Glatch 6-3 6-2.