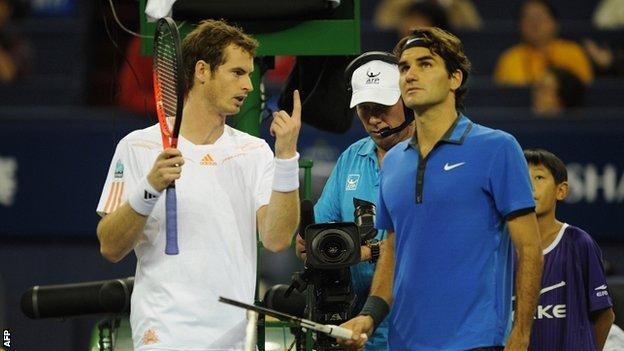 Andy Murray remains on course for his third successive Shanghai Masters title thanks to a 6-4 6-4 victory over Roger Federer in a one-sided semi-final.

The Briton, 25, took the first set after three straight double faults from Federer gifted him a pivotal break.

Two rain delays in the second, one before Murray served for the match, threatened to upset the Scot's rhythm but he kept his composure to win.

Both players produced some scintillating tennis in a semi-final that was halted for almost half an hour by light rain in China, with US Open champion Murray preparing to serve for the right to face Djokovic in a repeat of the New York final.

But the delay did not affect Murray's concentration as he powered to victory.

"He didn't serve that well for him so I was able to be very aggressive on his second serve," said Murray.

"He maybe slowed down his first serve a little bit so I was able to take a few more chances on the first serve. Obviously that helped, but I went for it like I did the last few times I played against him."

On Federer's three straight double faults, Murray added: "I haven't seen him do that in his whole career. I was being aggressive on the second serve, but still that is not something he would normally do.

"The balls here are very light so it can be tough sometimes to control the serve. But it was surprising."

The Scot led Federer 9-8 in head-to-head meetings going into the match following his gold medal-winning victory in the Olympic final.

Murray oozed confidence throughout, attacking Federer from the start in a stylish, aggressive display that left the Swiss looking well below his best.

It was an uncharacteristically edgy display from the 17-time Grand Slam winner, who struggled to cope with Murray's excellent returning - and it was a sign of the Scot's determined mood that he broke in the first game.

Murray surrendered that early advantage in the next, before the world number one saw his serve broken for a second time in the fifth game.

It came in remarkable fashion as Federer produced a scarcely believable run of three double faults to gift Murray the break.

The Wimbledon champion was again on the back foot in the opening game of the second set, saving six break points before the game's contentious first rain delay.

As a light rain shower began, and with the game still finely poised, Federer implored the match officials to halt play - to the displeasure of Murray, who was keen to continue.

A six-minute break ensued before Federer won an epic point immediately on the resumption, followed by an ace to complete the hold.

But it proved only a temporary reprieve for Federer.

At 2-2, the Swiss raced into a 40-0 lead only for a composed Murray to fight back to deuce and seal the break with two brilliant forehand winners.

Murray has won 12 matches, had two walkovers, and lost only two sets at the Shanghai Masters in three years.

With Murray 5-4 ahead and ready to serve for the match, the rain came again - but despite an even longer delay while the roof was closed, the Scot served it out without fuss.

Earlier, Djokovic improved his chances of replacing Federer as world number one by dismissing the challenge of fourth seed Tomas Berdych 6-3 6-4.

Djokovic, who won last week's China Open, has yet to drop a set in the tournament.

The Serb leads Murray 8-7 in head-to-head matches, but lost their last meeting in the US Open final in New York, which Murray won in five sets to win his first Grand Slam.