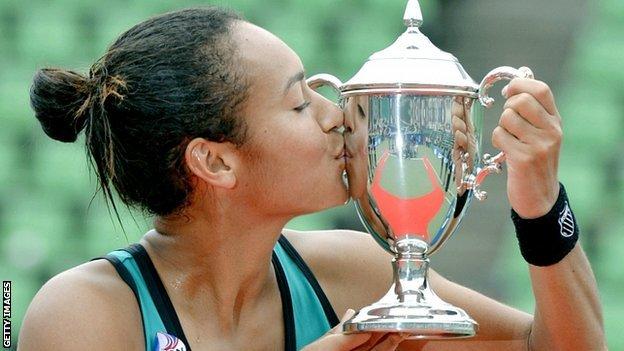 Heather Watson has become the first British woman to win a WTA singles title since 1988 after beating Chang Kai-chen in the Japan Open final.

Watson, who had served for the match at 5-3 in the second set, saved four match points when 5-4 down in the third.

Sara Gomer was the last British woman to win on the tour, four years before 20-year-old Watson was born.

"I'm going to be sleeping with a smile on my face tonight," Watson told BBC Radio 5 live afterwards.

"In the second set I served for the match, had one match point and I double faulted, not because I was nervous, but because I went for it.

"The whole match from start to finish was so close and such a mental battle. Kai-chen was playing unbelievable and I just had to hang in there.

"But I just took it point by point and I don't know how I did it, but I did.

"Now I've got the title and I'm so happy. This ranks as one of the best days of my life."

Watson's win in Osaka comes less than a month after compatriot Laura Robson made it to the final of the Guangzhou Open in China, becoming the first British woman to reach a WTA singles final since Jo Durie in 1990.

Watson had not previously gone past the quarter-finals of a WTA event and will now replace Robson as the British number one.

The 2009 US Open girls' champion earned 16 break points but conceded 17 in a see-saw battle with world number 134 Chang.

Watson broke four times in the first set, only to drop her serve three times in the second to let the 21-year-old from Chinese Taipei back in to the contest.

And Chang, who beat Sam Stosur in the semi-finals, looked set for victory when she held three match points when serving in the 10th game of the decider.

But the Guernsey player fought back and sealed the biggest success of her career with her second match point in the tie-break.

Shortly after beating Chang, Watson returned to the court as she bid to become the first Briton to win both the singles and doubles at the same WTA tournament since Anne Hobbs in 1985.

She reached the doubles final alongside Japanese veteran Kimiko Date-Krumm, but they lost 6-1 6-4 to United States pair Abigail Spears and Raquel Kops-Jones.