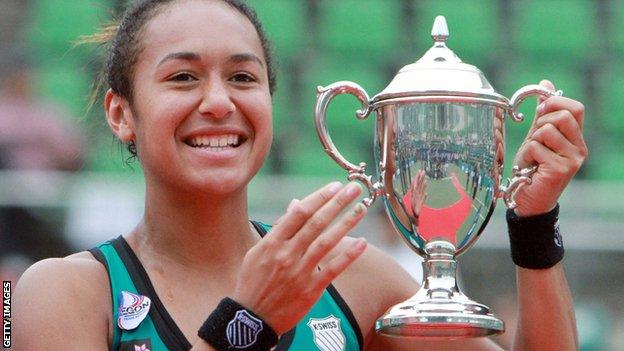 Heather Watson believes she has the potential to be world number one after becoming the first British woman to win a WTA singles title in 24 years.

Watson beat Chang Kai-chen of Chinese Taipei at the Japan Open on Sunday.

The 20-year-old rose 21 places to 50th in the world rankings, replacing Laura Robson as British number one.

"I definitely believe in myself. I wouldn't be in the game if I didn't. I have the mental toughness and the capability," Watson told BBC Sport.

"You know all these girls think the same thing, so it's just who can do it, and I'm just going to do whatever it takes."

Before her success in Osaka, she had never progressed beyond the quarter-finals.

By winning the Japan Open, Watson emulated Sara Gomer, the last British female to win on the tour. Her triumph in the Northern California Open in 1988 came four years before Watson was born.

Fellow Briton Laura Robson, 18, is ranked 52nd in the world after a successful season in which she won Olympic silver with Andy Murray in the mixed doubles.

"I think we have been starving a little bit for a female player to come through," Watson said.

"At the moment me and Laura are coming through at the beginning stages of our career and it's exciting."