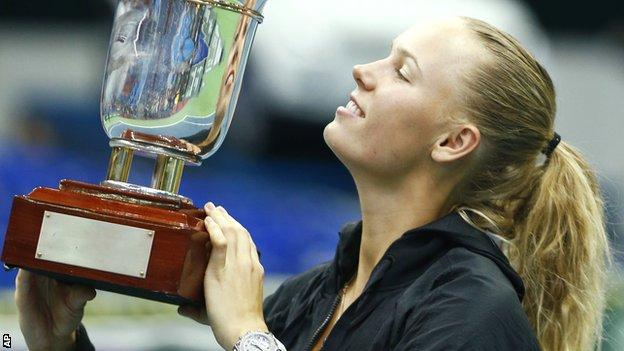 The third-seeded Dane hit back from 3-1 down in the third set to clinch her second title of the season.

The former world number one is showing signs of returning to her best after also winning last month's Korea Open.

But Wozniacki insisted: "Sam played well and it could have gone either way."

Caroline Wozniacki's father, Piotr, was a professional footballer and her mother, Anna, an international volleyball player for Poland. The 22-year-old is currently dating golf world number one Rory McIlroy

Stosur had looked on course to end her 13-month title drought after she broke the Dane to love at the start of the final set before powering into a 3-1 lead.

But Wozniacki recovered her poise to draw level after breaking the Australian's serve in the sixth.

She still had to save three break points in the ninth game before earning two match points against Stosur's serve in the 12th.

Stosur saved the first with an ace but missed a running forehand on the second to concede defeat after two hours and 13 minutes.

Wozniacki, 22, added: "I hit some good shots close to the lines on important points and it made the difference."

Stosur, who has a poor record in finals with just three wins in 15 appearances, said: "I definitely had a few chances. I think I went for the right shots but missed by a couple of inches.

"I'd rather be aggressive and go for my shots than wait for my opponent to make a mistake."

Bellucci twice served for the match in the second set, but Seppi fought back to force a tie-break.