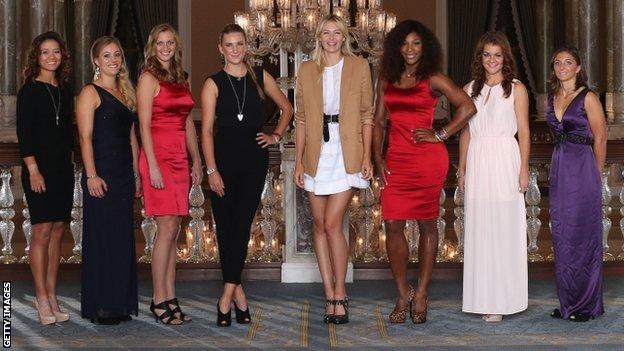 Victoria Azarenka will aim to avenge her US Open final defeat by Serena Williams when they compete in the Red Group at this week's WTA Championships.

They will also face Li Na and Angelique Kerber in the round-robin stage at the season-ending event in Istanbul.

The tournament starts on Tuesday, with two from each group reaching the semis.

Since losing to Williams in the US Open final in September, Azarenka has won 13 straight matches and has now held the number one ranking for 34 weeks.

The Belarusian won the Australian Open in January, as well as five other titles this season, and needs only two wins in Istanbul to end the year as world number one for the first time.

The 23-year-old, who lost last year's season-ending final to Kvitova, was 5-3 up in the final set of the US Open final before Williams fought back to win.

"I will have to server better when serving for the match, that's for sure," Azarenka said of the imminent rematch with the American she has beaten only once in 11 matches.

"I don't think we have ever played indoors, so it will be a new occasion."

Williams has not played since winning her 15th Grand Slam singles title.

The world number three also won Wimbledon and the Olympic gold medal in the summer, but has no chance of deposing Azarenka after playing in fewer tournaments than her rival this season.

Sharapova, the world number two, briefly held the top ranking after winning the French Open and could regain it in Turkey.

"When you're coming to the Championships you pretty much know what you're going to get in terms of the level of the group," the Russian said. "With the field we have this year, I think every match no matter what group you're in is going to be pretty tough."