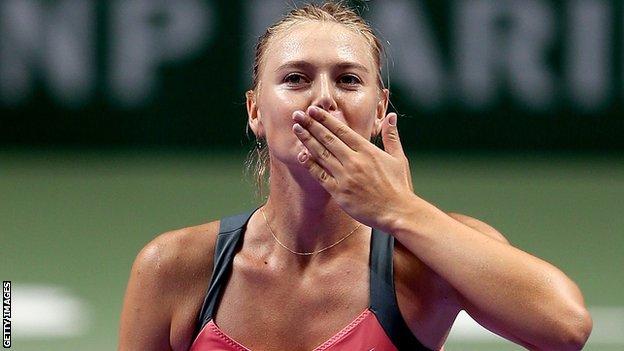 Agnieszka Radwanska, Serena Williams and Maria Sharapova all won their opening matches as the WTA Championships started in Istanbul.

Russia's Maria Sharapova recorded a 6-3 6-2 victory over Italy's Sara Errani in a repeat of the French Open final.

Victoria Azarenka and Li Na are the other players in the round-robin event.

The top eight women in the world are taking part in the end-of-season showpiece event.

Belarusian Azarenka, Williams, Kerber and China's Na are in the Red Group, with the remaining players making up the White Group.

Two from each group go through to the semi-finals.

Williams said it was important to record a victory in her first game since winning a 15th Grand Slam title at Wimbledon in the summer.

"I really wanted to win today obviously. When you are playing anyone in the top five you just are trying to play better," Williams said.

"[Kerber] won the last time we played so I really just wanted to do well today."

Pole Radwanska was also pleased with victory over her Czech opponent.

"I am just happy that I could play my best tennis today and close that match in two sets," she said. "It's a good start."