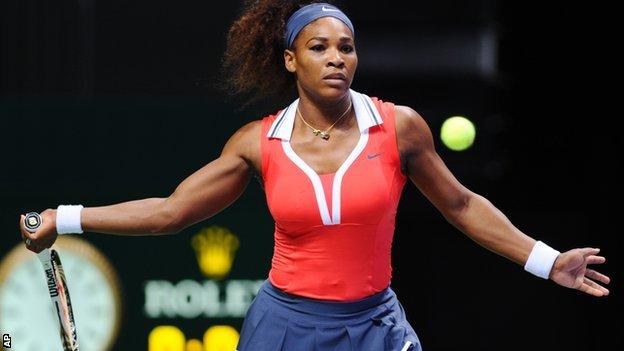 Serena Williams moved closer to the semi-finals of the WTA Championships in Istanbul with a straight-sets win over Li Na.

The American followed up Tuesday's win over Angelique Kerber with a 7-6 (7-2) 6-3 defeat of the number eight seed.

Depending on other results in the Red Group, Williams can lose her final match to Victoria Azarenka and still progress to the last four.

In the White Group, defending champion Petra Kvitova has pulled out ill.

The Czech, who is due to play in the Fed Cup final against Serbia in Prague next week, lost her opening match to Agnieszka Radwanska and has been replaced by Sam Stosur.

"I have to say sorry for the crisis today," said Kvitova. "I have a stomach virus.

"Yesterday when I played I thought that it was nerves, but normally nerves are gone after the first set and it was actually during the whole match, so I thought that something was wrong."

Azarenka, the world number one, begins her campaign against Kerber on Wednesday knowing that two victories in Turkey will ensure she ends the year on top of the rankings.

The Belarussian will be Williams' next opponent, after the 15-time Grand Slam champion overcame an erratic serve to defeat Na.

She gave away six double faults and won only 51% of points on her first serve, but the Chinese also struggled, with 11 breaks in total coming in the match.

"I will have to play better than in the first two games if I'm to do better against the number one player in the world," said Williams, who has won Wimbledon, the US Open and an Olympic gold medal this year.

"I need to relax. I'm a little upright and my serve needs to improve. I can play better."