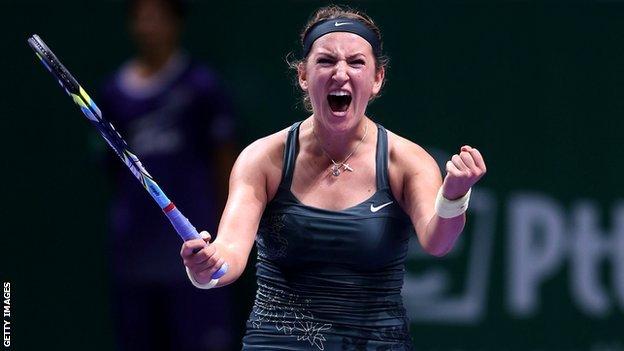 Victoria Azarenka is one win away from ending the year as world number one thanks to a hard-fought three-set victory over Germany's Angelique Kerber at the WTA Championships in Turkey.

She faces Serena Williams on Thursday in her next group match.

Kerber, 24, started brightly against Azarenka, a succession of forehand winners proving key as she took the first set on a drawn-out tie-break.

The contest soon became attritional, however, and world number one Azarenka gradually asserted her authority, taking the second set on another tie-break before closing out the third.

"On the two match points against me I felt I had to go for it," Azarenka said. "I felt she would not miss, so I didn't want to wait for her to make a mistake - I was determined to make it happen.

"I wanted to change the momentum and take destiny into my own hands. I had a clear mind of what I had to do. It takes time to go through [what's needed] to learn that."

Williams, 31, heads the Red Group by virtue of having played, and won, one more match than Azarenka.

Maria Sharapova, the world number two, is the only player who can finish above Azarenka at the top of the rankings in 2012.

The Russian, competing in the White Group, beat Agnieszka Radwanska of Poland 5-7 7-5 7-5 in Wednesday's final match.

Defending champion Petra Kvitova, who is due to play for the Czech Republic in the Fed Cup final against Serbia in Prague next week, withdrew through illness on Wednesday.

She had lost her opening match to Radwanska and was replaced in the group by Australia's Sam Stosur.

"I have to say sorry for the crisis," said Kvitova. "I have a stomach virus.

"Yesterday when I played I thought that it was nerves, but normally nerves are gone after the first set and it was actually during the whole match, so I thought that something was wrong."