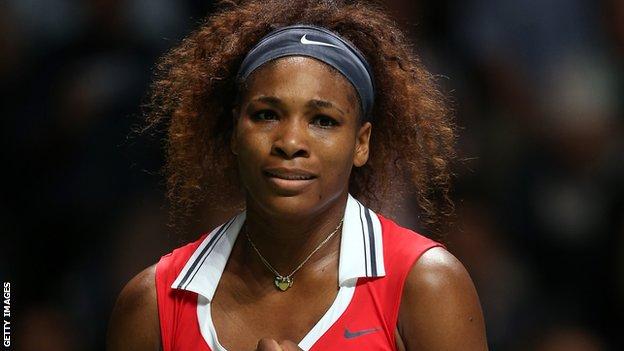 Victoria Azarenka faces a wait to see if she can end 2012 as world number one after being beaten 6-4 6-4 by Serena Williams at the WTA Championships.

The American led the head to head between the duo 10-1 before Thursday's match and came back from 3-0 down in the second set to secure her 11th win.

World number three Williams, who beat Azarenka in last month's US Open final, had already secured her place in the semi-finals after beating both Li and Kerber.

"I've been struggling with my serve in the first two rounds and I knew I could do much better, she said.

"I knew I needed to play better to win against Victoria, who has had a stellar year."

Azarenka must now beat Li on Friday to make sure of her place in the semi-finals of the season-ending event in Turkey.

"I have been practising hard and expected to play better," said the Belarusian.

"When I did the right things I was in control much of the time, but I didn't have the consistency today."

She added: "I will give everything to win tomorrow. I will give 200%. I have another opportunity to stay in the tournament and to keep the dream alive."

In the other group Sam Stosur, who was a replacement for Petra Kvitova who withdrew through illness, was beaten 2-6 6-3 0-6 by Italy's Sara Errani.