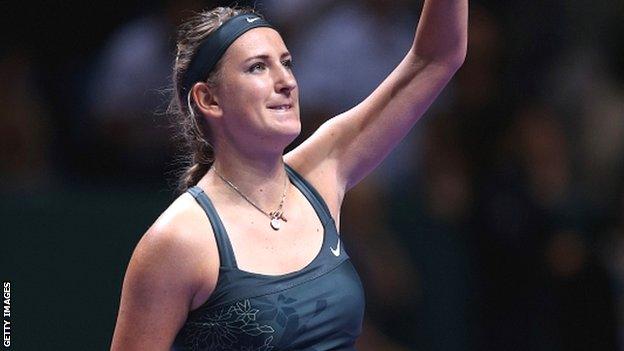 Victoria Azarenka will finish the year as world number one after beating Li Na to reach the semi-finals of the WTA Championships in Istanbul, Turkey.

The Australian Open champion from Belarus overcame her Chinese opponent 7-6 (7-4) 6-3 to book a meeting with Maria Sharapova.

The Pole's victory took three hours and 29 minutes, making it the longest match in the history of the year-end tournament.

Radwanska is into the last four for the first time, but the day belonged to Azarenka after she secured the season-end top ranking.

"It feels great, a dream come true," said Azarenka, who was runner-up at the US Open and also enjoyed a 26-match winning streak in 2012.

"I want to play my last matches here and then enjoy being the world number one. I want to focus on this competition, there are still lots of challenges ahead.

"All the players are on top of their game and it's great to be part of the women's game doing so well at the moment."

If Azarenka had been beaten by Na she would have been replaced as the year-end world number one by Sharapova.

The Russian, made the semis for the first time since 2007.

"I was just trying to be really aggressive today and not spend as much time [on court] as I did the other day," she said.

"I knew coming in I was already going to be in the semis, but I didn't want to lose. I wanted to do the right things today and I did them."