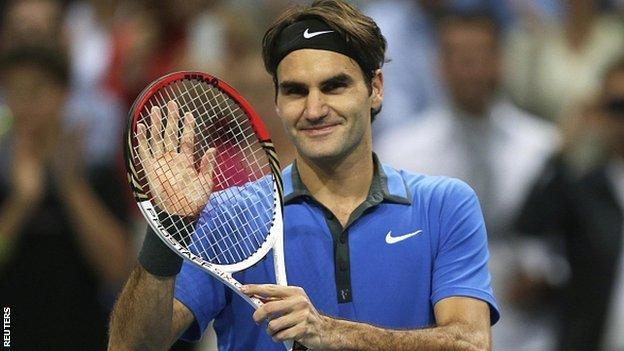 World number one Roger Federer beat Paul-Henri Mathieu 7-5 6-4 to reach the final of the Swiss Indoors in Basle.

Federer, a five-time winner of the event, will play Juan Martin del Potro in Sunday's final after the second seed beat Richard Gasquet 6-2 6-2.

Del Potro won in Vienna last week and his only loss on indoor hard courts this season came against Federer in the Rotterdam final in February.

Federer is chasing his sixth title in seven years in his hometown event.

Sunday's final is a rematch of the epic Olympic semi-final at Wimbledon in August, when Federer won the decisive third set 19-17.

Federer has a 13-2 career record against Del Potro, though one of the Argentine's victories came in the 2009 US Open final.

"It was almost perfect today," said Del Potro, who has beaten Gasquet in five of their six meetings, including three times in 2012.

"I was very pleased with my serve. But I still have work to do, I had two double-faults in the second set. If I want to win the title, I can't have that."

Federer said: "I'm excited to see how he is going to come out and play.

"We have had a couple of tough ones, at the French Open and particularly at the Olympics. I had a really hard time breaking his serve. The margins are extremely small."