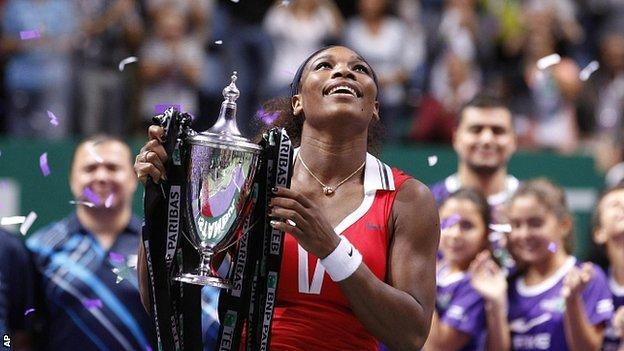 Serena Williams won her third WTA Championships title with a 6-4 6-3 win over Maria Sharapova in Istanbul.

Williams did not drop a set all week and Sharapova was unable to make much impact on the American's serve.

"Maria won the last time we played in the Championships final [in 2004] and she's ranked ahead of me so I had nothing to lose," she said.

World number three Williams, 31, has won seven titles in 2012, including the US Open, Wimbledon and the Olympics.

"It feels great to have achieved my dream," added Williams.

"The Turkish crowd were fantastic. I have never seen so many signs with my name on them before."

Williams is back to the top of her game after battling career-threatening injury and illness in 2010 and 2011.

"It's awesome. To come back after being in the hospital, I feel so happy whether I win or lose," she said.

Williams finished the year with a 59-4 win-loss record and since her first-round defeat at the French Open, which Sharapova won, the American is 31-1.

"She had another great serving day against me, " said Sharapova. "I don't think I even had a break point.

"Maybe it was partly me not doing enough on the returns and partly she was serving well, but that's one of the reasons she's such a great champion and has had a tremendous amount of success in her career."

There was better news for Russia in the doubles final as qualifiers Maria Kirilenko and Nadia Petrova beat second seeds Andrea Hlavackova and Lucie Hradecka 6-1 6-4.

Meanwhile, four cities - Kazan, Russia; Mexico City, Mexico; Singapore; Tianjin, China - have been selected to enter the final phase of bidding to host the WTA Championships in 2014 and beyond. The winning city will be announced next spring.