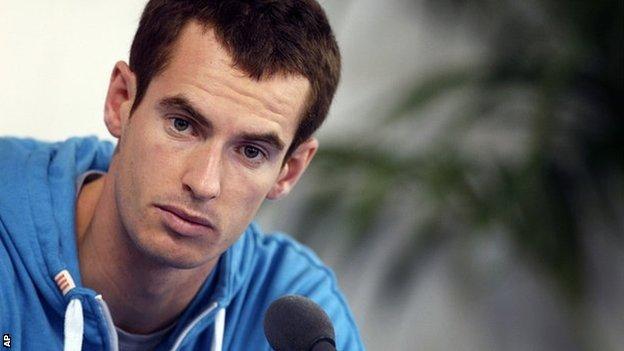 US Open champion Andy Murray says he is fully committed to this week's Paris Masters, despite the season-ending ATP World Tour Finals starting on Monday.

Roger Federer withdrew from Paris to prepare for London, but Murray is targeting back-to-back titles.

"I'm going to go for it this week and try and play well and have the best finish to the year possible," the Scot told BBC Radio 5 live.

Murray will play Paul-Henri Mathieu on Wednesday (not before 1830 GMT).

He enters the final weeks of the season in better shape than 12 months ago, when he was forced to withdraw from the Tour Finals through injury.

"I know how I felt at the end of last year," he said. "It was really tough for me to work all that time to get the chance to play at the O2 and not be able to finish the tournament.

This year is the first time there has not been a week's break between the Paris Masters and the Tour Finals, but Murray is not concerned by the schedule.

"Paris to London is a one-hour flight or three hours on the train," he added. "That might change when the Tour Finals move to a different venue. Right now I don't think it's too much of an issue."

The tournament is confirmed to remain in London until 2013, with reports suggesting a two-year extension is set to be announced.

"We're at the final stages of negotiation, so we're doing our best to keep it in London," tournament director Chris Kermode told 5 live. "Everyone has acknowledged it has been a huge success."

Asked about drug testing in tennis - in the light of recent revelations about cyclist Lance Armstrong - Murray told told reporters: "I don't think people look at tennis players in the same way that they would at cyclists because this sport hasn't had the problems they've had."

The world number three was given a blood test ahead of the Paris event but questioned the amount of testing that takes place away from tournaments.

"The out-of-competition stuff could probably get better," he said. "When we're in December, when people are training and setting their bases, it would be good to do more around that time."

Britain's Jonny Marray reached round two of the doubles on Tuesday with Australian partner Paul Hanley, as they beat Philipp Kohlschreiber and Florian Mayer 7-5 6-1.