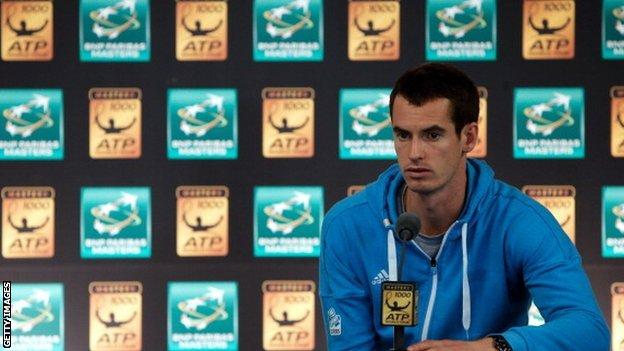 After 11 months, 17 tournaments, 66 matches, hundreds of hours on practice courts and thousands of miles travelled, Andy Murray could be forgiven for feeling weary ahead of the Paris Masters.

Roger Federer, for one, has already deemed Paris a bridge too far: "It's too much for me," the Swiss said on Sunday.

Instead, the 17-time Grand Slam winner prefers to rest before the season-ending World Tour Finals at London's O2 Arena next week.

And Rafa Nadal's body gave up on him after Wimbledon.

But Murray, after skipping the Swiss Indoors last week to remedy some back trouble, feels re-energised and ready to give his all in the last fortnight of the tennis calendar.

"I actually feel okay," he told BBC Scotland. "Most years we've finished the season two weeks later than this year - they've made some changes to the schedule.

"So I'm two weeks fresher than I was at this stage last year. I've had a full week off, so mentally I feel pretty refreshed.

"And during that week I didn't train, I didn't hit any balls, just completely relaxed and gradually came back at the beginning of the week."

A year ago, the Scot lost at the quarter-final stage in Paris to Tomas Berdych, before being forced to withdraw after just one match at O2 Arena with a groin injury.

And despite having already achieved two of his career goals this year by winning his first Grand Slam at the US Open and the Olympic gold medal, Murray has consistently indicated he is not ready to put his feet up just yet.

"They're big events and it would be nice to finish the year well at the O2 especially."

With the absence of Federer and Nadal, yet another final against the world number one elect Novak Djokovic has become a greater possibility for Murray.

But the Scot knows it is not a formality simply because they are the top two seeds.

"That would mean getting to the final - so that would be a great week for me," he said.

"But you never know at this stage in the season.

"Paris has always thrown up a few surprises early on in the tournament - normally because of the late stage of the season, and guys have sometimes looked ahead to the O2.

"But I want to play well this week and, hopefully, I'll get off to a good start."