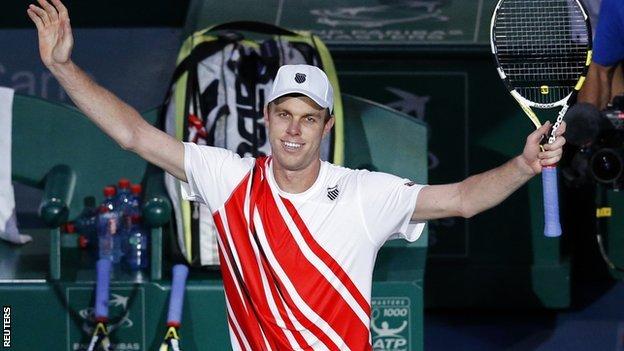 Novak Djokovic collapsed to a three-set defeat by American Sam Querrey in the second round of the Paris Masters.

The Serb, who is guaranteed to finish the year as world number one, looked to be in total control when he took the first set without dropping a game.

"For Djokovic, in the penultimate week of the season, his worst defeat of the year comes at a time of apparent great stress and strain. The Serb admitted to a press conference afterwards he's been dealing with issues off the court and, while he wouldn't expand on what they were, did say he has "done lots of travelling". He is believed to have arrived in Paris last Wednesday but left over the weekend. Reports say his father has been poorly in hospital in Belgrade. Djokovic hopes to be fully fit and ready for one final push at the World Tour Finals but, understandably, isn't only thinking about tennis right now."

There were also wins for David Ferrer, Juan Monaco and Janko Tipsarevic.

Spanish world number five Ferrer, who beat compatriot Marcel Granollers in straight sets, is now the highest seed left in the bottom half of the draw following Djokovic's defeat.

The second seed, who will replace Roger Federer at the top of the world rankings despite losing to Querrey, arrived on court in Paris wearing a Darth Vader mask to mark Halloween.

And Djokovic's jovial mood looked merited as he won the first eight games of the match. But Querrey, with his powerful forehand and a serve that yielded 18 aces, improved after finally making an impression on the scoreboard.

"I was concerned about how long I can keep that level, since physically I'm not feeling very good in last couple of days," said Djokovic. "When you're playing somebody that hits, that serves that well in the corners, there is nothing you can do.

"During the second set I already felt that physically I'm down, and I struggled every game.

"It's unfortunate, but on the brighter side, I have a little bit more time to rest because I had really difficult period in the last couple of weeks. Some things happened and [there are] a lot of things on my mind."

Argentine Monaco and Serbia's Tipsarevic will meet in the third round after straight-sets wins over Grigor Dmitrov and Igor Sijsling respectively.

The winner of that match is a potential quarter-final opponent for Andy Murray, who beat Paul-Henri Mathieu 7-5 6-3 in the second round.

Monaco, Tipsarevic, Raonic and Almagro - as well as Jo-Wilfied Tsonga - can still qualify for one of the two remaining places in the ATP World Tour Finals next week, but France's Richard Gasquet will not be in London after his three-set defeat by Kevin Anderson.

American John Isner also saw his hopes ended after a 6-4 7-6 defeat by Michael Llodra of France.

Elsewhere, British pair Colin Fleming and Ross Hutchins have gone out of the doubles competition in the second round, beaten 3-6 6-3 10-5 by Polish duo Mariusz Fyrstenberg and Marcin Matkowski.