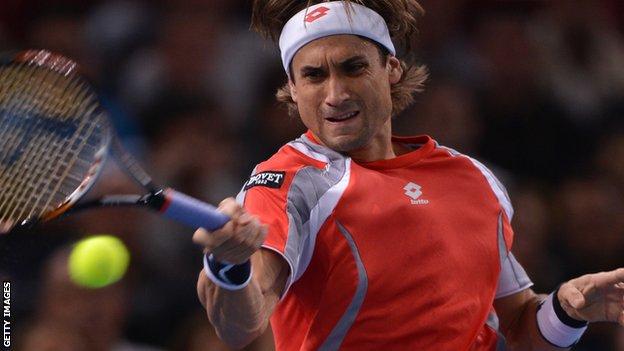 David Ferrer has the chance to win his seventh title of 2012 after beating Michael Llodra 7-5 6-3 to reach the final of the Paris Masters.

The Spaniard saved 10 break points in the first set before breaking Llodra's serve early in the second.

Ferrer will face qualifier Jerzy Janowicz in the final after the Pole's 6-4 7-5 victory over Gilles Simon.

Janowicz, who beat Andy Murray on Thursday, is the first qualifier to make the Paris final in eight years.

"I cannot believe this actually. How is this possible?" said Janowicz, who started the season ranked 221 in the world.

"I came here just to play qualifications, and suddenly after a few days I'm in the final. I don't know how did I this, but tomorrow the final is waiting for me. Wow."

After a close first set, Ferrer moved into a 3-0 lead in the second before a medical timeout for Llodra to receive treatment for a back injury.

The Frenchman lost the next game but fought back to take three of the following four games, before world number five Ferrer held his serve to seal the match after one hour and 53 minutes.

"I tried to be very focused every time (he had a break point)," said Ferrer. "I was more aggressive in the important moments."

France will not be represented in the final of this tournament for the first time since 2007 following Simon's defeat to Janowicz, in which the Frenchman was unable to break the 21-year-old Pole's heavy serve.

Janowicz, who is also the first player in 12 years to reach a final on his Masters debut, won 88% of first-serve points and did not face a single break point.

"I think I'm among the best returners on the circuit each year, and I didn't get the slightest chance," Simon said.

Sunday's final will also be the first in the ATP Masters 1000 series not to feature Roger Federer, Rafael Nadal, Novak Djokovic or Andy Murray since Robin Soderling's win over Gael Monfils in Paris two years ago.

Ferrer has lost all three of his ATP Masters 1000 finals, twice to Nadal and most recently to Murray in Shanghai in 2011.

Marray will now head to London to take part in the ATP World Tour Finals in London alongside his Wimbledon-winning partner Freddie Nielsen.