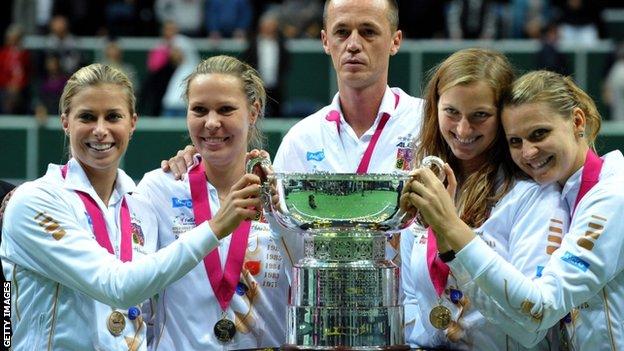 The Czech Republic secured back-to-back Fed Cup titles with a 3-1 win over Serbia before fervent fans in Prague.

A backhand winner from world number 17 Lucie Safarova sparked celebratory scenes in the Czech capital as she beat Jelena Jankovic 6-1 6-1.

Petra Kvitova and Safarova had put the defending champions in control on Saturday by for a 2-0 lead.

Ana Ivanovic reduced the arrears by beating Kvitova 6-3 7-5 on Sunday.

But Safarova defeated Serb number two Jankovic in one hour and 17 minutes to prevent the first-time finalists becoming the first team in the competition's history to overturn a 2-0 deficit in the final.

The Fed Cup is an international team event for women. Like the men's Davis Cup, ties are played in a best-of-five format with four singles and one doubles match. Nations are organised into groups, with the eight in the top-flight World Group playing a knockout competition to determine the champions

"It's hard to describe how I feel. I played an unbelievable game," Safarova said. "I desperately wanted to win and I'm really delighted. It's fantastic to win at home, in Prague. I played one of the best matches of my career."

Kvitova seemed to be suffering from the ill-effects of a cold that forced her to pull out of last week's WTA Championship.

The defeat by Ivanovic ended the world number eight's 11-game unbeaten run in the Fed Cup.

"I lost a lot of strength [on Saturday] and I was also drained emotionally," said Kvitova.

"I lacked energy. The doctor gave me some sugar during a bathroom break but it didn't help much."