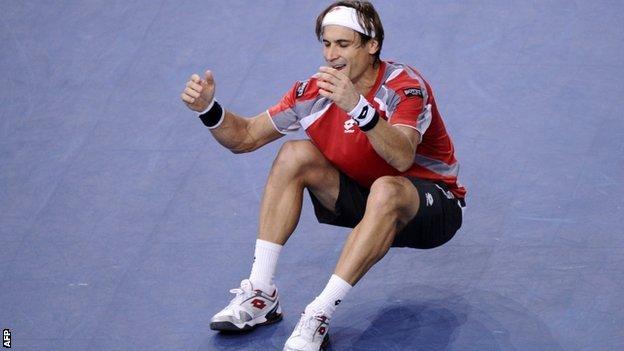 David Ferrer clinched his seventh title of 2012 by beating Jerzy Janowicz in the Paris Masters final.

The Spaniard won his maiden Masters event with a 6-4 6-3 win against Poland's Janowicz, the first qualifier to make the Paris final in eight years.

Fourth seed Ferrer was too consistent for the world number 69, who had beaten five players from the top 20, including Andy Murray, in reaching the final.

Ferrer will play in the ATP World Tour Finals starting in London on Monday.

He has been drawn in a group with Roger Federer, Juan Martin del Potro and Janko Tipsaravic while Janowicz is now set for a place in the world's top 30 when the new rankings are released on Monday.

Janowicz had the first break point in the ninth game but wasted it by sending a forehand into the net and when he sent another forehand long in the next game it allowed Ferrer take the opening set.

The Pole hit back in the third game of the second set, breaking for 2-1 when he successfully challenged a Ferrer forehand that was called in, but he committed a number of unforced errors allowing Ferror to break straight back.

Janowicz tried to pressure his opponent but Ferrer had too much experience and he wrapped up the win after one hour 27 minutes.

"I was very nervous because it was my chance to win a first Masters title but somehow I knew this time was my turn," said the Spaniard.