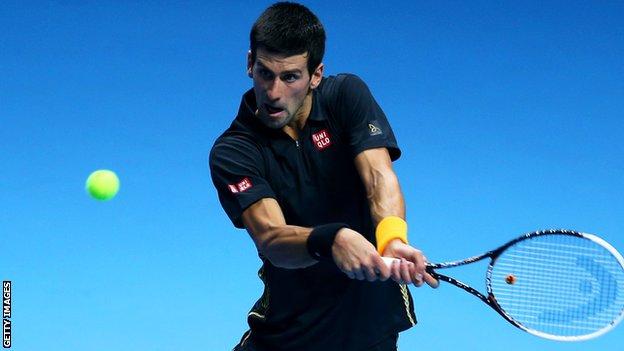 This match was very important for me mentally, to break the ice in some way, to return to the shape that I want to be in

It was the Serb's fifth victory of the year over Tsonga and took him to the top of Group A.

The opening day of round-robin singles action at the O2 went with the seedings and put Djokovic and Murray on track to take the two semi-final places in their group.

Djokovic won the Australian Open in January and is looking to sign off the season in style after ensuring he will top the year-end rankings for the second season in succession.

After losing to Murray in September's US Open final, he won titles in Beijing and Shanghai before a surprise first-round loss in Paris amid reports that his father was unwell.

Asked about that on his arrival in London, the top seed did not want to comment, but any fears that his mind might not be on the court receded as he saw off Tsonga in well under two hours.

The Serb flung himself around the court as he held off the Frenchman in the early stages and saved three break points in the opening set, before dominating the tie-break.

Tsonga, who made it to the quarter-finals in Paris last week, looked a deflated figure in the second set and quickly gave up the first break of serve of the night.

Within 20 minutes it was match point, and when Tsonga sliced a backhand volley into the tramlines an emotional Djokovic celebrated the victory.

"It means a lot, especially here when you're taking part in an event with the best eight players in the world," said Djokovic.

"There are no easy matches and no favourites really."

Asked how he was feeling compared to Paris, he added: "It's a different story, it's a different week. I mean, I had some difficult circumstances, some things I had to face.

"But that's why this match tonight was very important for me mentally, to break the ice in some way, to return to the shape that I want to be in, the mental state, and also to be confident and optimistic on the court and play my game.

"Hopefully I can carry this on to another match against Andy in two days."

Tsonga, who has now lost his last seven meetings with Djokovic, added: "I had many chances in the first set, I think the difference was there. It's more he's taking his chance all the time and me, I miss on big points.

"That was difficult for me because then he's playing free in the second set."

Group B gets under way on Tuesday, with Roger Federer taking on Janko Tipsarevic at 13:45 GMT and David Ferrer up against Juan Martin del Potro at 19:45 GMT.

Play begins with Britain's Jonny Marray and Dane Freddie Nielsen up against India's Mahesh Bhupathi and Rohan Bopanna in the doubles at 12:00 GMT.