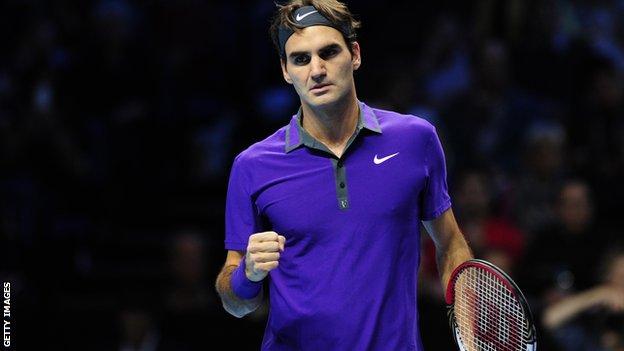 With loud backing from a big following at London's O2 Arena, the defending champion eased to a 6-3 6-1 win.

It was a record 40th victory in the season finale for the Swiss star, taking him past Ivan Lendl's 39 wins.

Federer, who will face Ferrer next, pulled out of last week's Paris Masters as a precaution ahead of London and said: "I'm happy with my performance today, no pain any more anywhere.

"I'm happy with my level of play against Janko, who is obviously a good player.

"Coming in knowing that I've played so well in past years, I expect myself to be at a solid level. I feel like I'm striking the ball well. I hope it's a sign of more to come but I don't want to get ahead of myself.

"I'm happy the first one went so well and it takes some pressure off looking ahead in the next couple of matches."

Tipsarevic made his O2 debut last year as an alternate, but this is the first time he has qualified by right.

However, the battle to grab the final place in the eight-man event took its toll, and the Serb admitted on Monday that he was not feeling 100% after retiring during his last match in Paris.

With that in mind, trying to beat Federer for the first time in six attempts, at an event the Swiss has won for the last two years, was always going to be a daunting task.

"I think Roger was just too good," said Tipsarevic.

"I have not been feeling great for the last couple of days but even in the previous matches that I played Roger, I wasn't having that much success.

A sweeping backhand winner gave Federer a break at the first opportunity and the 31-year-old was never threatened on serve as he wrapped up the set in half an hour.

Tipsarevic attempted to hang on as the 17-time Grand Slam champion threatened early in the second, but after saving two more break points, a netted forehand gave up the third.

With cow bells ringing around the arena from the Swiss contingent, a forehand winner gave their man the double-break and he strolled through the remaining games to seal victory in just 68 minutes.

Federer will play Ferrer on Thursday after the Spaniard extended his winning streak to 11 matches by beating Del Potro in two hours and 16 minutes.

Apparently buoyed rather than tired by winning his first Masters title in Paris on Sunday, Ferrer outdid the more powerful Argentinian in terms of winners and created 12 break points to Del Potro's three.

It looked as though Ferrer might have let it slip when four break points went begging in the second set, allowing Del Potro to level, and again when a 3-0 lead became 4-4 in the decider.

However, the fourth seed was not to be denied and Del Potro faltered when serving to stay in it, firing long on the first match point to give Ferrer his 73rd victory of a career-best season.

"I don't know the secret of my good form. It has been the best season of my career. Maybe it's because I didn't have a big injury," concluded Ferrer after his win.