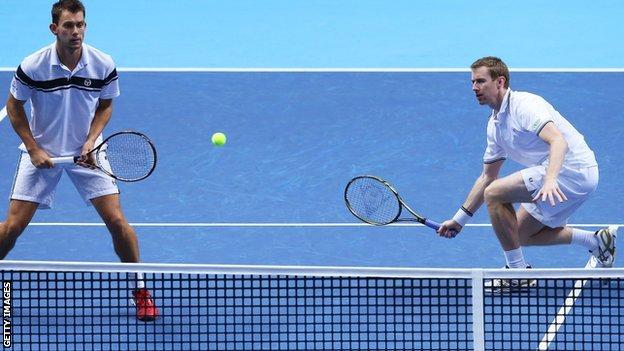 With two wins, Marray and Nielsen have ensured they will be one of the pairs to progress from Group B.

Eighth seeds Marray and Nielsen are outsiders at the O2 Arena, but they do not seem to be aware of that.

Having saved two match points to win their opening encounter, they survived another against the second seeds on their way to a remarkable win.

Asked if they might start feeling the pressure now they are into the semis, Nielsen said: "I think on the contrary.

"Coming through a few wins gives me a nice feeling and makes me feel at ease. It gives me more confidence going into the semi-final."

Marray added: "Like we proved at Wimbledon, getting closer to the prize there we continued to play the same way and enjoy ourselves, and have a bit of a laugh on the court as well.

"I think it's helped us to perform the way we do."

They were up against a formidable pair in Mirnyi and Nestor, who share six titles and 23 appearances at the season finale between them.

An early break was squandered when Marray missed a couple of volleys trying to serve out the opening set, but they dominated the tie-break that followed.

However, Nielsen double-faulted twice to give up a break at the start of the second, and Mirnyi and Nestor saw out the set comfortably to force a match tie-break.

Drama seems to follow Marray and Nielsen this year, and another tense finish saw one match point slip by before Mirnyi and Nestor had their own chance at the win.

Nielsen served brilliantly under pressure, though, and at the second time of asking the Wimbledon champions clinched the win when Mirnyi volleyed long.

The Tour Finals are likely to be Marray and Nielsen's final outing together before they go their separate ways in 2013.

Nielsen, 29, maintains that he will focus on singles next year, leaving 31-year-old Marray to search for a new partner in the off-season.

He added: "I wouldn't (reconsider) because, first of all, it's not a solid partnership. We take it tournament by tournament and see if we're available.

"I don't mind playing with Jonny, it's not that. I'm not in tennis to play with Jonny, unfortunately. Sorry, Jonny. No offence."