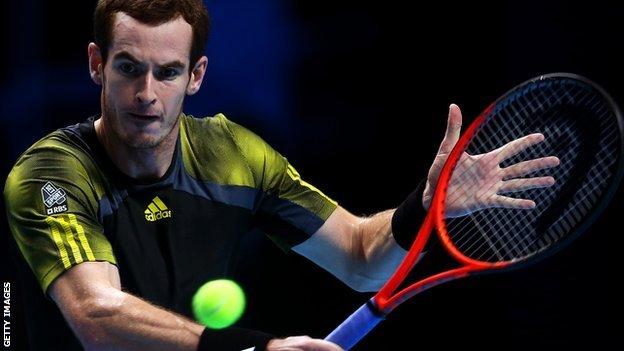 Andy Murray swept aside any fears he might endure a nerve-wracking night by powering into the semi-finals of the ATP World Tour Finals.

That left the Briton second in Group A behind Novak Djokovic, who earlier beat Tomas Berdych 6-2 7-6 (8-6).

After suffering an agonising - and confusing - exit in 2009, when he won two group matches but was eliminated on the tie-breaker of percentage of games won, Murray made sure there was no slip-up this time.

Afterwards, the Scot revealed he had only realised what he needed to do to progress as a result of a conversation with coach Ivan Lendl.

"When we chatted before the match he just said, 'Just focus on trying to win the match, don't think about winning one set and concentrate on winning the match.' So I didn't know exactly what I needed to do, but obviously when he said that I kind of realised."

Murray added: "It didn't really make a huge difference. Maybe the game I was serving for the first set probably would have been a little different. In some ways, it feels like you're serving for the match when you know you're through if you win that.

"I was very focused from the start of the match, I got off to a good start. It didn't make any difference at all."

He went into Friday's match with a 6-1 record against Tsonga and quickly set about reasserting his authority, playing a brilliant opening game.

Some typically quick-footed defence helped set up two break points, and the Scot converted the second when he attacked the net with a vicious backhand slice.

Tsonga's explosive game was misfiring from the start and the unforced errors began to flow, a forehand into the net giving up the double-break as Murray surged into a 5-1 lead.

There was a minor scare for the majority of the 17,000 spectators when the home favourite double-faulted on his second set point, but Tsonga duly obliged by firing long on the third, and Murray had secured his semi-final place after just 33 minutes.

As well as Murray was playing, Tsonga was having a desperate time under the gaze of new coach Roger Rasheed.

A double-fault gifted Murray another break at the start of the second set and the Frenchman narrowly escaped falling further behind in game three.

With his hopes all but gone, Tsonga finally produced a burst of quality as he broke back to love for 4-4, winning an epic rally and infuriating Murray in the process.

A spectacular leaping smash gave notice that the seventh seed was now feeling loose and he earned himself a set point at 6-5, only for the forehand to let him down once again.

Murray was in no mood to extend his Friday evening any longer than necessary and took the initiative in the tie-break, a clever slice when scrambling to the backhand side helping him change around with a 4-2 lead.

Four match points arrived after one hour and 35 minutes, and the second was dispatched with a thumping ace.

The British number one is through to the semi-finals for the second time in four visits to the O2, and will be desperate to finish the best year of his career, in which he also won Olympic gold, with a place in Monday's final.

He will first have to get past Federer, who qualified on Thursday, or Del Potro, who could yet lose out to David Ferrer when Group B is concluded on Saturday.

However, the Spaniard can finish no higher than second in the group and so would avoid Murray.