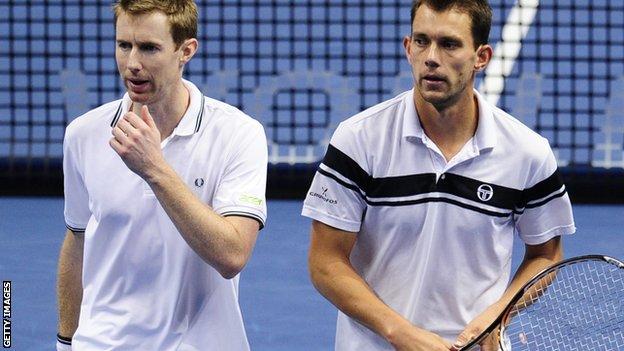 Jonny Marray and Freddie Nielsen failed to maintain their 100% record at the ATP World Tour Finals but still made the semi-finals.

However, the British-Danish pairing had already qualified after winning their opening two matches.

They will learn their semi-final opponents when Group A is completed on Saturday.

India's Rohan Bopanna and Mahesh Bhupathi earlier took the second qualifying place in Group B with a 7-6 (7-5) 6-7 (5-7) 10-5 win over defending champions Max Mirnyi and Daniel Nestor.

Lindstedt and Tecau had already seen their semi-final hopes disappear with two defeats ahead of Friday's final group match, but they were looking for revenge after defeat in the Wimbledon final.

A flashing backhand return winner from Lindstedt earned them a second break and with it the first set after half an hour.

Marray and Nielsen edged ahead early in the second but could not hold on, and a match tie-break looked on the cards until Lindstedt came up with another piece of magic.

Serving at 6-5, Marray was pegged back to deuce and with it a deciding point, which saw Lindstedt crack a forehand return down the line to take the win.