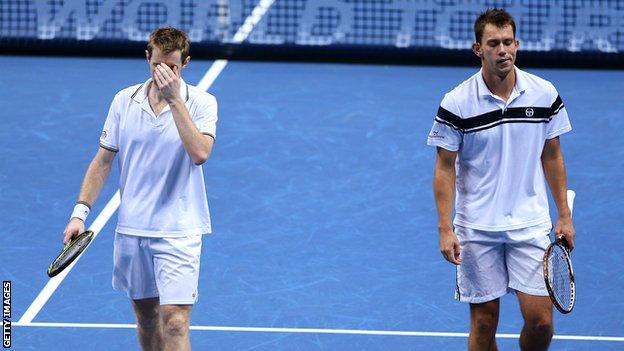 Britain's Jonny Marray and his Danish partner Freddie Nielsen are out of the ATP World Tour Finals, beaten in straight sets in their semi-final.

It could be Marray and Nielsen's last game together, with the Dane declaring a wish to focus on singles next year.

"It was a sad slow walk off the court for Jonny Marray and Freddie Nielsen at the end, but they can hold their heads high. They have had a fantastic year. I wouldn't rule out the possibility of them playing together again. After all, they both support Liverpool - and Liverpool fans like to stick together! I'm sure they will play together again at some stage, but probably not as an official pairing."

Granollers and Lopez will face India's Mahesh Bhupathi and Rohan Bopanna in the final on Monday at 18:00 GMT.

Bhupathi and Bopanna beat the Indian-Czech pairing of Leander Paes and Radek Stepanek 4-6 6-1 12-10.

Marray and Nielsen were chasing the first set after being broken in the third game. They could not salvage it despite creating six break points, including when at 4-5.

They were then broken in the fifth game of the second set courtesy of a stunning backhand return down the line from Granollers.

Marry and Nielsen looked to be back on course when they broke back but again let things slip in their next service game, despite being 40-0 up.

The Spanish pair quickly closed out the match from there, with Lopez sealing victory - and a third break of serve in the set - with a sharp return.