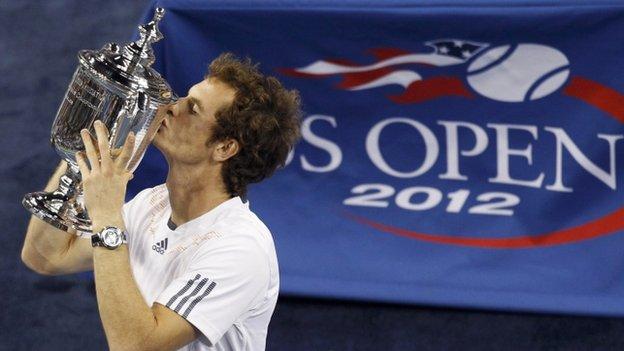 And there you were thinking this sporting summer had given us everything it could.

Andy Murray's nerve-mangling, history-making US Open triumph over Novak Djokovic was many things: one of the great finals of the modern era, a late-night thriller from the city that never sleeps, a breath-taking demonstration of physical strength and mental fortitude.

This fairytale of New York was also the perfect bookend to a few months that British sport can scarcely believe and will never forget.

Hoodoos, holy grails and history books have all gone up in smoke: 29 Olympic golds, a Briton in yellow on the Champs-Elysees, and now the granddaddy of them all - a British male with his hands on a Grand Slam trophy.

In the end, after 76 years and a stomach-churning four hours 54 minutes, the wait ended in almost mundane fashion - a tired backhand return, Murray pulling his racquet aside, the yellow ball dropping gently beyond the baseline.

No-one will be complaining. This was a moment many feared would never happen, not only in this extraordinary contest or Murray's so-nearly-man career but in lifetimes accustomed to British also-rans and plucky losers on a tennis court.

Nit-pickers and day-dreamers might say the curse is never truly lifted until a British man wins Wimbledon. Let them take their caveats somewhere dark and unpleasant.

Jamie Murray, Andy's brother: "What a historic night! Tonight Andy achieved his dream. He got the result his talent, dedication and perseverance deserved. So proud of him.

Brad Gilbert, Murray's former coach: "What a close from the Muzzard. That was an epic final, major props to the guys - a pleasure to watch."

Rory McIlroy, golf world number one: "Massive congrats Andy Murray!!!! The first of many and well worth the wait!"

BBC tennis correspondent Jonathan Overend: "Autumn, you've got a hell of an act to follow. Andy Murray has just capped the greatest summer."

There were hard yards and panicked slips on the way. A player of Djokovic's calibre, on his favourite surface, could never make it anything else. Neither could Murray's seemingly in-built tendency to torture his support with moments of banality and error to follow the sustained brilliance.

The difference this time, in his 28th joust at a Grand Slam, was that he truly believed he was worthy.

After four defeats in his first four Grand Slam finals, the Scot needed something to change. The arrival of Ivan Lendl has been that catalyst, even if having James Bond in his corner on Monday night hardly did any harm.

Sean Connery smiled and whooped all night as Lendl stayed characteristically taciturn. But that was always part of Lendl's plan, always part of the solution.

The Murray of finals defeat has been a player who has slipped too easily into fury and funk, yelling at his support team, beseeching his box for inspiration and assistance. There's little point in trying that when the man staring back at you last grinned in the last century.

With the new-found mental resilience has come greater aggression, a stronger forehand and more unyielding serve. With the Olympic gold medal on Centre Court came both closure and an opening of the doors to the inner sanctum.

The US Open has always been Murray's favourite major, the surface at Flushing Meadows the one that has most suited his game ever since he won the junior title there in such style eight years ago.

When he broke Djokovic in the very first game of the contest it unleashed rampant early confidence. When the Serb broke him back and then matched him blow for blow as the first set took an hour and 20 minutes to reach a tie-break - one rally reaching 54 shots - memories were stirred instead of their five-hour semi-final ding-dong in Melbourne at the very start of the year.

Murray came through both that tie-break and then, at pace, the second set. As Djokovic came stampeding back to take the next two, you feared that all that early optimism was merely a cruel precursor to his most agonising reverse yet.

To take the deciding set in such style under such circumstances against an opponent of this calibre should convert the disbelievers once and for all.

The two men might be separated in age by just one week, but until this week there has been a gulf between the two.

Going in to Monday's denouement Djokovic has five Grand Slam titles and a record on hard courts so remarkable that his last defeat in a big tournament on the surface came in the final on Arthur Ashe in 2010.

Murray had to win his first Slam in the hardest possible manner. When Djokovic took his debut major he did so against Jo-Wilfried Tsonga; Roger Federer beat Mark Philippoussis, while Rafa Nadal only had to get past Mariano Puerta.

From here? Easy New York cliché would tell us that if Murray can make it here he can make it anywhere. Sporting precedent indicates that when his coach Lendl finally won a Slam after four final defeats of his own, he then went on to win seven more.

That worry can wait for another week. In Britain's best ever sporting summer, Murray deserves a little time to celebrate as the rest of us have since May squelched into June.

Only one fear remains. How do we top all this?