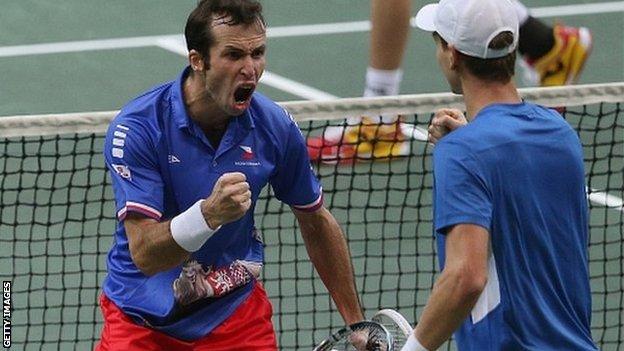 The Czech Republic took the lead in the Davis Cup final with victory in the doubles against Spain in Prague.

Berdych will take on David Ferrer and Stepanek faces Nicolas Almagro in the decisive singles matches on Sunday.

Spain are the reigning champions but without world number four Rafael Nadal, who is recovering from a knee injury.

It was no great surprise when Berdych and Stepanek replaced Saturday's original Czech nominations of Lukas Rosol and Ivo Minar, with Spain able to field the pairing that

Granollers and Lopez made the stronger start but the Czechs came roaring back, and Stepanek was especially impressive as they began to dominate.

There was late drama when Berdych looked to have closed out the win on the third match point, only for Hawk-Eye to overrule a line call, but a Berdych smash did the job on the replayed point after three hours and 19 minutes.

"That's all we wanted," said Berdych. "We are still missing a lot - it's just one point - but we are looking ahead and we will do everything."

The world number six can clinch his nation's first Davis Cup win as an independent nation [Czechoslovakia won in 1980] with victory over Ferrer on Sunday, otherwise it will come down to a decisive fifth rubber.

"We knew what we are capable of doing in Davis Cup," said Stepanek.

"We have played together so many times. Plus with Tomas coming off a four-hour match (on Friday) and coming so strong here today, it just shows the desire and hunger we have for the trophy."