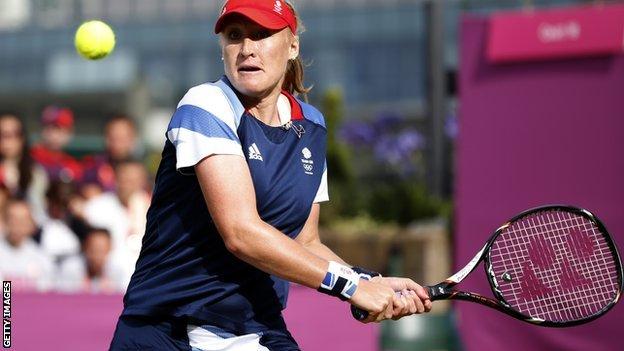 Elena Baltacha hopes to return from injury in March and believes she can play for at least two more years.

The Scot, 29, under went foot surgery in October and, having not played since the Olympic Games in July, admitted she had doubts over coming back.

She has slipped to 173 in the world but has a protected ranking of 103, so will qualify for Grand Slams on her return.

"My motivation to come back is that I think I've still got two or three more years," Baltacha told BBC Sport.

"I don't think having that last match at the Olympics against Ana [Ivanovic] was the right time to pack it in. To be honest, I really needed that break. I didn't realise how exhausted I was, mentally and emotionally, and I hit a wall.

Asked if she believed she could overhaul the likes of Laura Robson and Heather Watson to regain the British number one spot, Baltacha said: "I think anything is possible."

Watson and Robson have excelled in her absence, with the former becoming the first British woman to win a WTA title since 1988 and ending the year ranked 49, and the latter rising to 53 in the world and being named WTA newcomer of the year.

"I'm not ruling anything out but I'm not going into it thinking, 'I have to be number one,'" Baltacha added.

"If I come back and I'm not, I'm still going to be very happy with what I've achieved - being top 50 two years on the trot, all my top-10 wins - I will always be very, very proud of what I achieved.

"If it doesn't happen then that's just the way it is, but if I do, absolutely fantastic."

Baltacha's last match was a second-round loss to Ana Ivanovic at the Olympics, and the Briton admitted that at the time she had not expected to return, saying: "I went in knowing that was going to be my last tournament. I was so tired, mentally and emotionally."

However, Baltacha is now eight weeks into her rehabilitation and several weeks ahead of schedule, with hopes of returning to the practice court in the new year.

The plan is to compete again in Indian Wells, which would prove a tough test after an eight-month lay-off as one of the most prestigious events on the circuit.

"I know it's probably going to be quite a few levels above what I'll be capable of, but the reason I picked it is it's one of my favourite tournaments," she said.

"It's a good goal and will push me to try and get ready for that and give it a go. If I'm not ready then I'll come back in April and start on the clay. The last two years I've really enjoyed playing on clay. I never thought I'd ever say that but the last two years I've absolutely loved it."