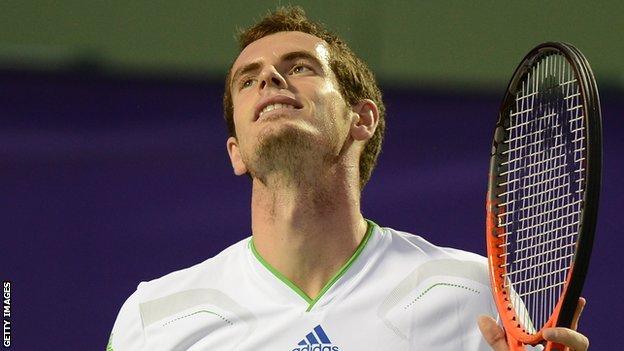 Andy Murray lost in straight sets to Janko Tipsarevic in the opening match of the Mubadala World Tennis Championship in Abu Dhabi.

Murray, 25, says he will learn from the defeat ahead of the Australian Open, which starts on 14 January.

"I have some things to work on in the next few weeks, but I am looking forward to it," he said.

Murray, a two-time runner-up of the Australian Open, continues his preparations with the defence of the Brisbane International title he won earlier this year.

"I have been training very hard in Miami," he said.

"I enjoy Australia and have had played some of my best tennis there, so I hope that I can do the same this year."

Murray lost just four points on his serve in the opening set, all in the fourth game where Tipsarevic broke to love to go 3-1 up. Murray had two break points in the ninth game, but the Serb held his nerve before converting his fourth set point to take the first set 6-3.

The Scot then dropped his serve again in the first game of the second set. First he double-faulted to give Tipsarevic the opportunity, then he put a forehand into the net on the break point.

The Olympic champion and US Open winner had a chance to break back in the fourth game, but Tipsarevic recovered to hold, then served out the rest of the set with few further scares.

Tipsarevic will face Spain's Nicolas Almagro in Friday's semi-final. World number 11 Almagro is a late replacement for Rafael Nadal, who withdrew from the six-player tournament with a stomach virus.

In the day's other game, Spain's David Ferrer beat Tomas Berdych of the Czech Republic 6-2 6-4 to set up a semi-final meeting with world number one Novak Djokovic.