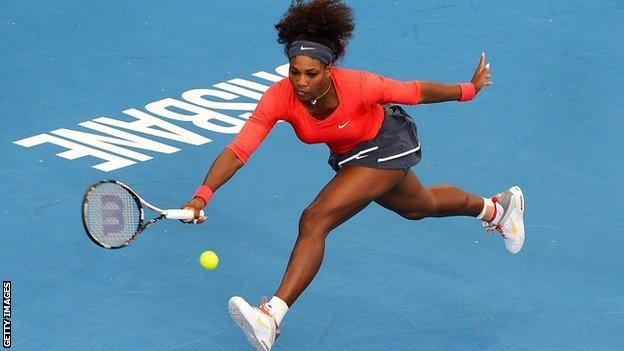 Serena Williams is focusing on trying to win all four Grand Slams in the same season for the first time as she gears up for the Australian Open.

The 15-time Grand Slam champion held all four majors in 2002-03 and opened her season with an easy win in round one of the Brisbane International.

The American beat Varvara Lepchenko 6-2 6-1, despite missing a recent exhibition in Thailand for toe surgery.

"Absolutely," she said when asked if she could win all four majors in 2013.

"Whoever wins the Australian Open will have that same thought. There is no way that Victoria (Azarenka) or Maria (Sharapova) or maybe some other players don't feel the same way. So I think I definitely feel that way."

Williams, 31, added the 2003 Australian Open to the US Open, Wimbledon and French Open titles she won in 2002 to claim the "Serena Slam".

No woman singles player has achieved the feat of winning all four Grand Slams in the same calendar year since Steffi Graf in 1988.

The Brisbane International features a strong field as players gear up for the year's first major in Melbourne from 14-27 January.

Of the world's top 10, only Agnieszka Radwanska and Li Na are missing, with Azarenka and Sharapova receiving a bye to the second round.

Williams won 31 of her last 32 matches in the second half of the 2012 season, including titles at Wimbledon, the Olympics, the US Open and the WTA Championships. She won 58 of 62 matches in total.

"I was a little nervous, but I was completely fine," the third-ranked Williams said after beating fellow American Lepchenko in under an hour in breezy conditions in Brisbane.

"The doctor said I would be fine. I was excited to get an early start, so just in case I did have any pain I could have tomorrow off. But everything was fine."

In other matches, sixth-seeded Petra Kvitova beat Carla Suarez Navarro of Spain 6-3 6-4 and will next meet Russia's Anastasia Pavlyuchenkova, who beat Lucie Hradecka of the Czech Republic 6-3 3-6 6-3.