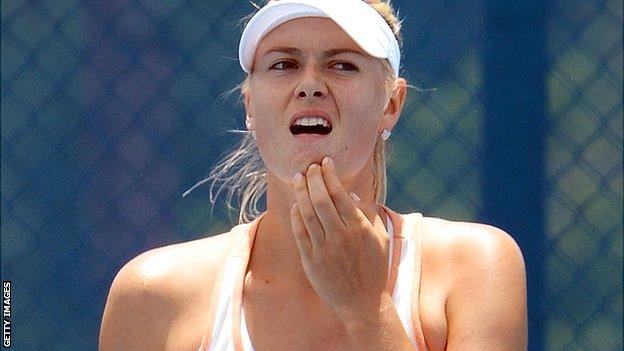 Maria Sharapova has pulled out of the Brisbane International on Tuesday as a precaution before the Australian Open.

The French Open champion recently withdrew from an exhibition in South Korea because of an injured collarbone.

"I don't want to jeopardise what I've gained in the off-season so far," said the world number two.

American Serena Williams, ranked third in the world, advanced to the quarter-finals with a 6-2 6-2 victory over Alize Cornet of France.

Williams, 31, who won Wimbledon and the US Open last year along with Olympic gold and the season-ending WTA Championships, only needed an hour to beat the world number 44.

The former world number one will play either fellow American Sloane Stephens or Sofia Arvidsson of Sweden in the last eight.

Sharapova, 25, withdrew from the Brisbane event last year but recovered to reach the Australian Open final, where she lost to Victoria Azarenka.

The French Open champion added: "I still have quite a bit of time to prepare for Australia. I'm on the right track, been training really well."

The 2011 champion Petra Kvitova of the Czech Republic lost 6-4 7-5 to Russia's Anastasia Pavlyuchenkova while fifth seed Sara Errani of Italy was also knocked out, losing 4-6 6-1 7-5 to Slovak Daniela Hantuchova.