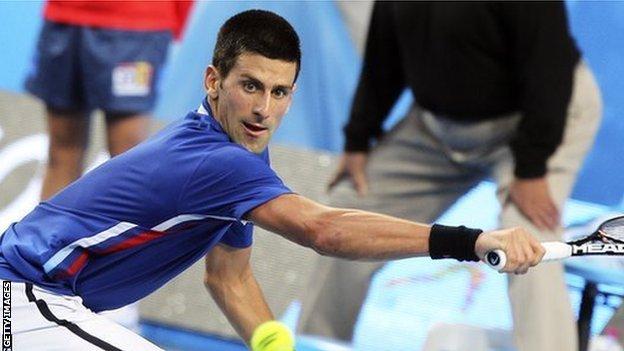 Novak Djokovic's preparations for this month's Australian Open suffered a setback when he lost to Bernard Tomic at the Hopman Cup team event.

World number one Djokovic went down 6-4 6-4 as Australia took a 1-0 lead against Serbia in Perth.

The defeat came two days after a crowd barricade fell into Djokovic's shin while he was signing autographs.

"I knew I was coming to Australia really late," said Djokovic. "It takes time for me to get used to it."

Djokovic will be anxious to return to winning ways before he launches the defence of his title at the Australian Open, which starts on 14 January.

The 25-year-old has won the Australian Open for the last two years and beat Andy Murray in the 2011 final.

The Serb duo then teamed up for the deciding mixed doubles rubber and looked on course for a comfortable win when they took the first set.

But Tomic and Barty battled back to win the second set on a tie-break. That resulted in a champions tie-break which Djokovic and Ivanovic won 10-6 to record a 6-4 6-7 (8-10) 10-6 victory and Serbia's second group win of the tournament.