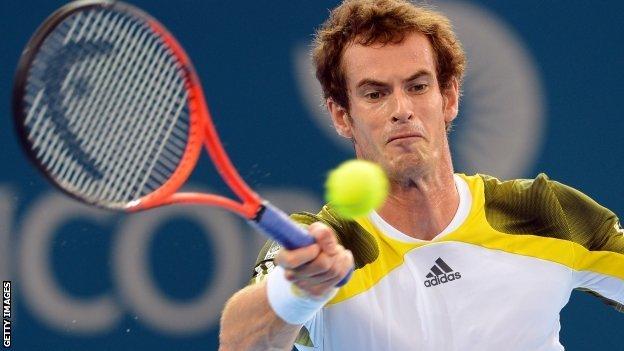 Britain's Andy Murray reached the semi-finals of the Brisbane International with a straight sets victory over Uzbekistan's Denis Istomin.

US Open champion Murray struggled in his opening three-set win against John Millman but looked more comfortable in his second match of the year.

Murray won the first of three titles in 2012 in Brisbane, beating Ukraine's Alexandr Dolgopolov with the loss of just four games.

The world number three went on to win gold at the London Olympics and his maiden Grand Slam at the US Open.

The Scot looked to have shaken off the rustiness evident in his second-round match against Millman as he sealed the first set with a single break.

Two double faults at 3-4 in the second put Murray on the back foot, but he held his nerve to hold and the set went to a tie-break.

Though Istomin opened up a 2-0 lead with an early mini-break, Murray won seven of the next eight points to close out the game in one hour 37 minutes.

Murray said: "For the most part it was pretty good quality. He served well for the majority of the first set, and especially well at the beginning the second.

"I didn't really have that many chances on returns, so I needed to serve well today. That helped."

The other semi-final will see Grigor Dimitrov take on 2006 Australian Open finalist Marcos Baghdatis after both beat seeded players.

Bulgarian Dimitrov served 17 aces on his way to a 6-3 6-2 victory over seventh seed Jurgen Melzer of Austria.