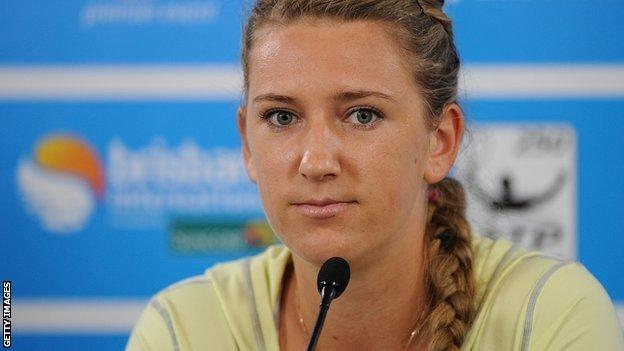 World number one Victoria Azarenka has blamed a bad pedicure for forcing her out of her Brisbane International semi-final against American Serena Williams.

The Belarusian said she could not risk aggravating an infected big toe ahead of the defence of her Australian Open title, which starts on 14 January.

"It just got infected from a bad pedicure experience. I had somebody who gave me infection," said Azarenka, 23.

"The doctor said it happens a lot. [It's] never happened to me [before].

She added: "It's something that I am definitely going to prevent for the next time."

Azarenka, who won the Sydney International before claiming her first Grand Slam win at the Australian Open during a 26-match winning streak, has lost all but one of her previous 12 matches against Williams.

The top seed announced her withdrawal 30 minutes before the scheduled start of the match, stating that the infection had got so bad that she had needed to visit a doctor to have part of the nail removed.

"I tried everything," added Azarenka. "We tried medication with taping, and I was playing through the pain for quite a while.

"It's just something that I had to do to make sure that I can be fully recovered and ready for Australian Open. It's that kind of compromise I had to take."