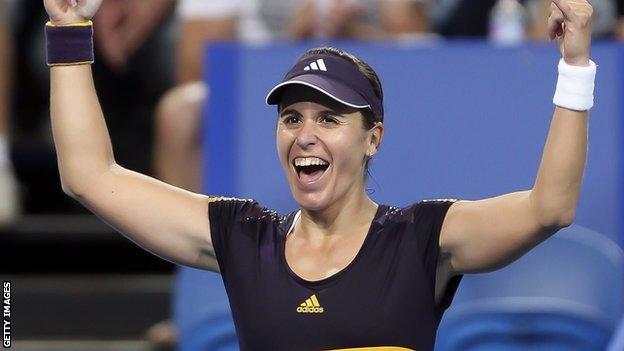 Novak Djokovic and Ana Ivanovic have been beaten in the final of the Hopman Cup by the Spanish duo of Fernando Verdasco and Anabel Medina Garrigues.

The Spanish pair then combined to win the mixed doubles 6-4 7-5.

Following Djokovic's victory, world number 13 Ivanovic was odds-on to give Serbia their first victory in the tournament.

Ivanovic then called for the trainer early in the second set, but still managed to level at one set all.

We were unfortunate last time, this time we were beaten by a better team

Medina Garrigues, 30, eventually took the match after two hours and 38 minutes and immediately ranked the victory as one of the best of her career.

"Winning the Roland Garros doubles [in 2008 and 2009] was exciting also, but here I didn't expect to be in the final and then win, so I am really happy," she said.

Despite the marathon match the pair were soon back on court for the deciding mixed doubles rubber.

The Spaniards had the edge when it came to doubles experience and it showed as they won in straight sets to take the tie overall.

Verdasco paid tribute to the efforts of his team-mate: "She won three singles matches and she played really good in the mixed.

It was the third time Djokovic and Ivanovic had played together after previously teaming up in 2006 and 2011 but they were forced to pull out of the final two-years ago after Ivanovic suffered an abdominal injury.

"We were unfortunate last time, this time we were beaten by a better team," added Djokovic, who will be chasing his third successive Australian Open title at Melbourne Park from 14 January.