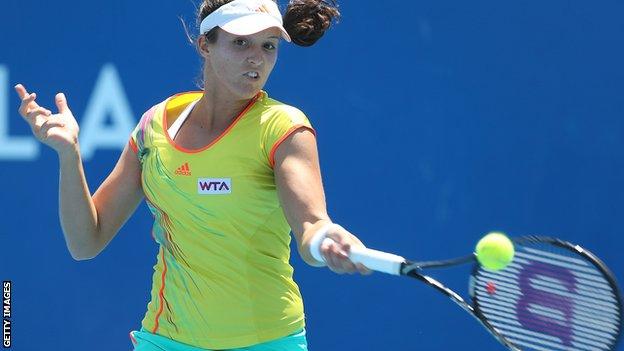 Laura Robson was beaten by eighth seed Sloane Stephens in the first round of the Hobart International.

Robson, 18, will now turn her attention towards the Australian Open, which starts on 14 January.

British number one Heather Watson withdrew before the tournament because of an elbow injury.

Stephens is ranked at 38 in the world, with Robson 53rd.

After beating Fed Cup team-mate Stephens in the Brisbane International last week, 15-time Grand Slam champion Serena Williams said the teenager could be the "best in the world one day".

A break of serve in the first game was enough for Stephens to win the first set against Robson, and she led 3-1 in the second.

Although Robson fought back to take the set to a tie-break, she was left to rue missing five break points in the match.

Robson, who won an Olympic silver medal with Andy Murray at London 2012 and was named WTA Newcomer of the Year in November, lost to Monica Niculescu in the second round of the Shenzhen Open last week.