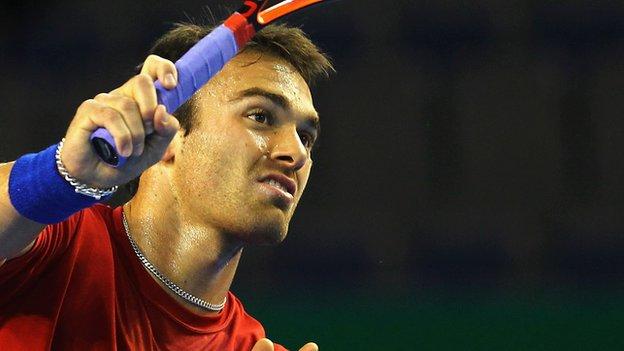 Britain's Ross Hutchins says his hope of playing Tour tennis in 2013 will drive him through treatment for Hodgkin's lymphoma, a form of cancer.

The 27-year-old doubles specialist was diagnosed on 27 December and tweeted his condition on Sunday.

"I want to play again this year, I want to be on court, in tournaments and winning matches," he told BBC Sport.

"I think it helps to have a target. I'll be doing everything and fighting every side effect to be there."

He added: "It is a long process and one where there will be some quite tough times ahead but you just want to get it out of you and then get on with life."

Hutchins enjoyed his best-ever season on the ATP Tour in 2012 as he and regular partner Colin Fleming reached four doubles finals, winning titles in Eastbourne and

However, the first half of 2013 will be consumed by his battle against Hodgkin's lymphoma, which is a cancer of the white blood cells found in the network of vessels and glands throughout the body.

Nearly 1,500 people are diagnosed with the disease each year in the United Kingdom, with almost all young patients fully cured.

"Doubles is the form of the game which, it always strikes me, requires the most positivity. Hold your end up, boost your partner when things are down, all that touchy-feely stuff. Thankfully Ross Hutchins, one of the most straight forward and likeable blokes I've ever met, exudes such positivity every day both on and off the court. It's why he'll fight this vile opponent and hopefully win handsomely. And while he can't wait to return to the court later in the year, we can't wait to have him back in the commentary box where, undoubtedly, he is a rising star."

Hutchins begins his treatment at London's Royal Marsden on Thursday, with two chemotherapy sessions over a four-week cycle that is expected to repeat for six months.

The Londoner's condition came to light as he struggled with severe back pain that did not respond to physiotherapy.

"I was having a lot of sleepless nights, lying on the floor throughout my three-week China trip in October," he added.

"Eventually, one physio said that he thought that I needed to rule out a kidney pain, a cancer pain or a tumour pain.

"He said I needed to have some tests because it is not normal to be in this sort of pain for this amount of time."

Hutchins is a close friend of world number three Andy Murray and shared his condition with the Scot on the same day it was diagnosed.

"I didn't know that he was going to do it. He has known from day one and we have been very close and speaking about everything. He has been extremely supportive, asking questions and sending little presents," Hutchins said of his Davis Cup team-mate Murray.

"I guess that is the type of relationship that we have but I did not know that he was going to dedicate that win to me. It meant a lot, it was very special and very touching. He is a true friend."