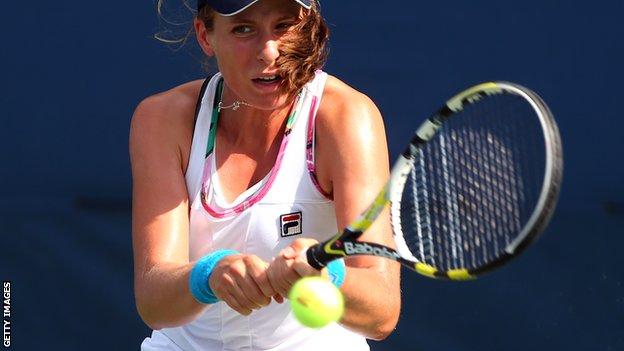 Johanna Konta battled her way into round two of qualifying at the Australian Open but fellow Briton Anne Keothavong went out in straight sets.

But after Jamie Baker and James Ward won on Wednesday, Keothavong could not make it four out of four for Britain.

The Londoner served for both sets but lost 7-5 7-5 to American Grace Min.

Konta, 21, was born in Sydney but became a British citizen last May and has made steady progress up the rankings, currently standing at 153 in the world.

After receiving a wildcard for Wimbledon last year she made it through qualifying at the US Open, and is on course to do so again in Melbourne after a fine win in round one.

Konta dominated the opening set against Sevastova, who was ranked as high as 36 in the world early in 2011 before a series of injuries.

The 22-year-old Latvian showed more of that class as the match progressed, fending off a match point in the second set tie-break to force a decider.

However, Konta broke serve at the first opportunity and held on to her advantage gamely under increasing pressure as the finish line approached.

It was harder going for the British contingent over on Court Five, where 22nd seed Keothavong failed to put her best game together consistently enough.

With the temperature rising in the middle of the day, the 29-year-old Briton hit back from 4-1 down to serve for the opening set, only to let the chance slip by as Min reeled off three games in a row.

Keothavong took the early initiative in the second with a double break for 5-2 but did not win another game as her American opponent wrapped up the victory in a little over two hours.