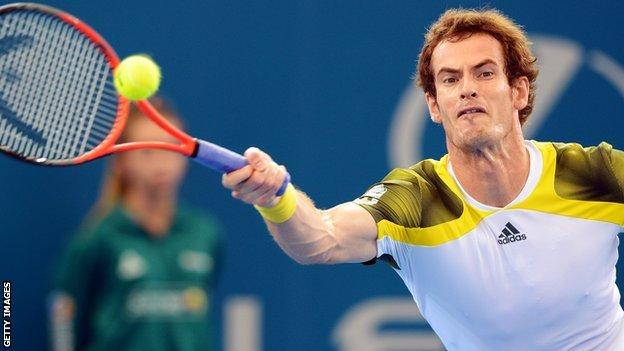 British number one Andy Murray will open his bid for a second Grand Slam title against Dutchman Robin Haase at the Australian Open next week.

The draw, which took place in central Melbourne, pitted the US Open champion against the world number 54.

Murray could face Juan Martin del Potro in the last eight and Roger Federer in the semi-finals.

Murray has been drawn in the opposite half to world number one and defending champion Djokovic, meaning they could only meet in the final.

Murray at the Australian Open

The Scot has a 1-1 record against Haase, and their last match was a dramatic five-set victory for Murray at the 2011 US Open.

Speaking before the draw, he said: "It sounds cliched but I don't really ever look beyond the first round of the draws.

"The strength of the men's game right now means it's dangerous to look too far ahead, so I'm happy taking it match by match."

He added: "I always love coming out to Australia, it's a great Slam and all the players love it, there's a laid-back atmosphere here and it definitely beats the weather back home this time of year.

"Having said that, it can hit 40 degrees during the day, so fitness and recovery definitely play a big part.

"I've performed consistently here and have been in two Grand Slam finals here in the last few years, but I'm aiming to go one better this year."

Djokovic plays Frenchman Paul-Henri Mathieu in round one, and fourth seed David Ferrer is a potential semi-final opponent.

In-form Australian Bernard Tomic will open against Leonardo Mayer of Argentina, with Roger Federer potentially waiting in round three. The Swiss plays France's Benoit Paire in round one.

Watson, ranked 47, looks to have the better draw of the two British women as she starts against Romania's world number 89.

Cadantu won their only previous encounter on clay last year but Watson has since moved into the world's top 50 and won her first WTA title.

Robson will meet former Wimbledon champion Petra Kvitova or former French Open champion Francesca Schiavone in round two, should she get past American Oudin.

The pair have met once before in the seniors, with Robson winning in Melbourne 12 months ago.

Watson will play on Monday, Murray and Robson on Tuesday.

Williams and Azarenka are in the same half of the draw, which could also see Venus Williams take on Maria Sharapova in round three.

The order of play will be announced on Saturday, with first-round matches played on Monday and Tuesday.