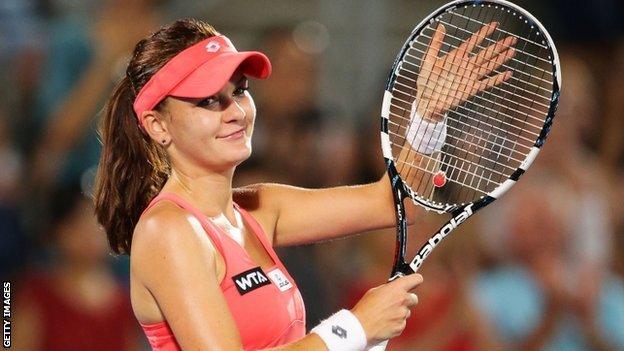 Cibulkova had reached the final by beating three top 10 players but she struggled in the decider.

Radwanska, who had also won last week in Auckland, wrapped up victory in a little over an hour.

"It's been an amazing two weeks," she said. "If I can play like that in Melbourne, I'll be very happy."

But the fourth seed for next week's Australian Open, who will face home wildcard Bojana Bobusic in her opening match, said she felt sympathy for Cibulkova.

"That's tennis and these things happen," added the 23-year-old Pole. "But I feel bad because for sure she didn't deserve that result."

Meanwhile, David Ferrer, the men's fourth seed for Melbourne Park, showed he will be a challenger by defeating Gael Monfils 6-1 6-2 to reach the final of the Auckland Open and remains on course for a fourth title at the tournament.

With Monfils hampered by a leg injury, Ferrer needed just 49 minutes to wrap up victory and set up a meeting with Germany's Philipp Kohlschreiber in Saturday's final after the German beat American Sam Querrey 6-4 7-6 in the earlier semi-final.

The world number seven, who could meet Andy Murray in the quarter-finals of the first Grand Slam of the year, defeated Marcos Baghdatis 6-4 6-1 and will meet former world number one Lleyton Hewitt in Saturday's final.