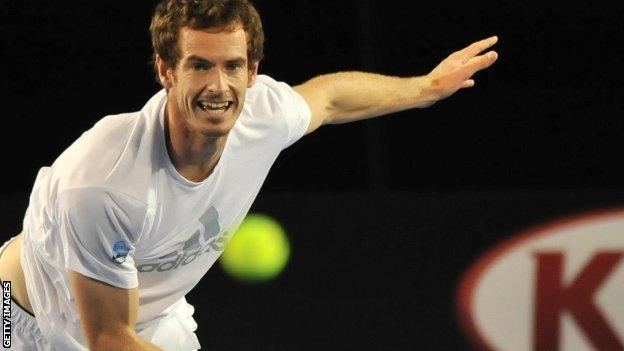 Andy Murray insists that finally winning his first Grand Slam title has not diminished his drive heading into the Australian Open in Melbourne.

The Briton, who faces Dutchman Robin Haase at 00:00 GMT on Tuesday, said: "I'm revved up, that's not an issue.

"I didn't at any stage say I was 'very relaxed'. I feel more relaxed than I have done the week before a Slam in the past, that's going to be natural."

Baker came through three rounds of qualifying to reach the main draw and will meet Lukas Rosol, conqueror of Rafael Nadal at Wimbledon, in the third match on Court 20 at approximately 04:00.

Robson will begin her campaign at a similar time on Court Three against American Melanie Oudin.

Hopes of a British victory on finals weekend in a fortnight's time remain firmly with US Open champion Murray, however, and he will hope his regular winter training block in Florida pays dividends once again.

"I didn't work hard in Miami in the off-season to come in and not be focused or too relaxed or anything like that," said the Scot.

"I didn't train over there for four weeks to come here and put in a really bad performance. I plan on playing well here."

Murray, 25, is seeded third in Melbourne but widely tipped to reach the final and a rematch with world number one Novak Djokovic, the man he beat at the US Open but has lost to for the last two years in Melbourne.

"I think after the matches we've played over the last year or so, they have been incredibly physical, incredibly tough," said Murray.

"It has been pretty painful at times in some of the matches, but I think our respect for one another has probably grown over the last 18 months or so. But we have never had any problems with each other.

"I chat with him all the time and with his team when we see each other."

Murray has won both his previous matches against Haase, but the last was a dramatic five-set win at the US Open in 2011 and the Briton is expecting another test.

"He's very talented," said Murray. "He likes playing on big courts. He tends to come out firing and going for big shots, playing extremely aggressive, so I'll need to be prepared for that."

Victoria Azarenka begins the defence of her title in the second match on Rod Laver Arena, before four-time champion Roger Federer takes on Frenchman Benoit Paire.

"I purposely didn't play a lead-up tournament so that I'd be fresh for the beginning, hopefully going deep into the tournament," said Federer. "That's the goal, obviously."

Azarenka might be the top seed and defending champion but Serena Williams is widely regarded as the favourite for the title, and the American plays Romanian Edina Gallovits-Hall in the second match on Hisense Arena.

"I've been a favourite so many times and I've been the ultimate underdog several times," said Williams. "I like being the underdog a little bit. You don't have any pressure.

"Being the favourite is fun too, because then you feel like you're the one to beat. If it came down to it, I would prefer to be the underdog."