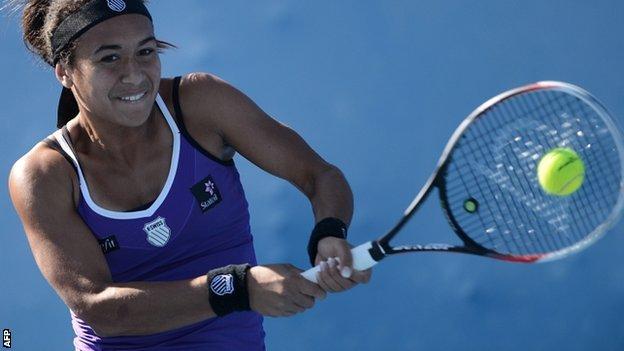 Heather Watson staged a remarkable comeback to beat Romania's Alexandra Cadantu in the first round of the Australian Open.

The British number one trailed by a set and a break, but came out firing after a medical time-out for cramp to win 2-6 6-3 6-2.

Watson, ranked 50th, had lost her only previous match against Cadantu on clay last May, and it looked for a long time on Court 13 as though she would be making a swift exit at the hands of the world number 91.

The crowd today were amazing. I loved how they were banging their feet on the stand. I'm really grateful to everyone who came out today

"At the beginning I definitely wasn't there," said Watson. "I wasn't playing well; I didn't have much energy today. I don't know what it was. I think I'm going to see the doctor."

An elbow injury had caused Watson to withdraw from the warm-up tournament in Hobart but she denied that had been a concern, saying the preceding match which ran for over three hours had been more of an issue.

"The match before was a long one and we never knew when we were going on," she said. "I was warming up for like two hours."

A second serve hit the bottom of the net on the very first point and set the tone for the next hour or so, with Cadantu offering little in the way of errors to help Watson out.

The 20-year-old from Guernsey was in deep trouble at a break down in the second set, struggling with cramp when she asked for the trainer after game five.

However, she was treated quickly by the doctor, who then moved over to deal at great length with Cadantu, who appeared to have issues with her arm and foot.

A rejuvenated Watson immediately found her range on the resumption, firing off winners that had been absent all afternoon as she won four straight games to level the match.

"When I started cramping, I had to start hitting the ball because I couldn't move," she said. "I'm kind of thankful that I did cramp today, otherwise I don't know how that would have ended up.

"I think the break did help me. It gave me time to eat, get some fuel in me and just get recharged."

An early break of serve in the final set was recovered by Cadantu, but the momentum did not shift.

Cheered on by a healthy British contingent in the outer reaches of Melbourne Park, Watson powered through the final set in little over half an hour to make round two for the first time.

"The crowd today were amazing throughout," said Watson. "They were just as loud even when I was not winning any points, 6-2 3-1 down, they were still there supporting me.

"I loved how they were banging their feet on the stand. I'm really grateful to everyone who came out today."