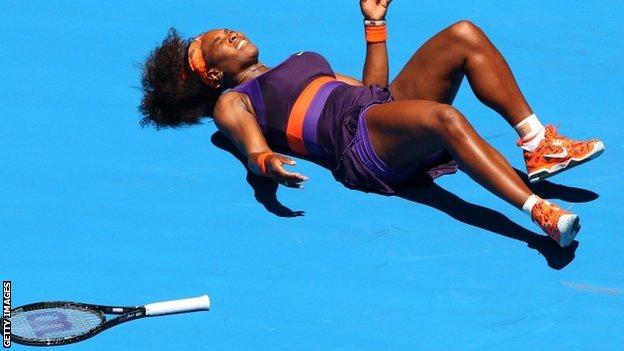 "That was as solid an opening win as you could wish for at a Grand Slam tournament, Murray looking a class apart and more physically imposing than ever. A few wayward drop shots and slip-ups on serve will give coach Lendl something to glower about in the post-match debrief, but Joao Sousa will have to come up with something pretty extraordinary if he is to trouble the Briton in round two."

The British number one started his quest for back-to-back Grand Slam titles with a commanding victory over the Dutchman.

World number one Azarenka kicked off her Australian Open title defence with a hard-fought win. The Belarusian top seed, who beat Maria Sharapova in the final last year, won the first set easily but had to save two break points to stop herself going 4-0 down in the second.

Azarenka, who pulled out of a warm-up event in Brisbane because of an infected toe, said: "It's much better. I have been practising for the last couple of days so I am really happy it's all gone and it's behind me. It's great to be back, there were a lot of overwhelming emotions out there. I started really well but the second set was a struggle. I am pleased to get through."

Federer was a comfortable winner in his first match of 2013. The Swiss, who will next face either Israel's Dudi Sela or former world number three Nikolay Davydenko of Russia, hopes his decision to play no warm-up matches does not come back to haunt him.

"I've had a few busy years since I had kids," he said. "I just wanted to cool down a bit. It's nice to enjoy the off season. I hope it's the right decision, we'll see how it goes. I'm confident in my play."

The former world number one looked in trouble after losing the first set and falling 3-0 down in the decider, but she fought back superbly to win the next six games and reach the second round. The 10th-seeded Dane only hit 12 winners to 45 for Lisicki, but the big-hitting German also made 57 unforced errors to just eight for Wozniacki.

Unless something fatal happens to me, there's no way I'm not going to be competing. I'm alive. My heart's beating. I'll be fine

Williams, the reigning Wimbledon and US Open champion, recovered from a painful ankle injury to reach the second round. The world number three, leading 4-0 in the first set, slipped on the surface and lay motionless before receiving lengthy medical attention. Williams carried on gingerly, but was otherwise untroubled as she secured an emphatic victory.

"Oh, I'll be out there," she said when asked if she would be playing her next match on Thursday. "Unless something fatal happens to me, there's no way I'm not going to be competing. I'm alive. My heart's beating. I'll be fine."

Del Potro, the only player outside the 'big four' of men's tennis to have won a Grand Slam event in the last eight years, remained circumspect about his chances of breaking back into the elite after winning his opener. The Argentine lost a year of his career to a wrist injury after winning the US Open in 2009 and since his return has failed to rediscover that form.

"Roger Federer, Novak Djokovic, Andy Murray and other guys are the favourites to win the tournament," said the 24-year-old Del Potro. "They are so far from me at the moment. Hopefully I can go far, but I need to play better and better."

She surpassed Britain's Virginia Wade, who won a match in 1985 at the age of 40 years 138 days, as the oldest winner.

Date-Krumm, who made her first appearance in Melbourne in 1990, still has some way to go to become the oldest winner at a Grand Slam. The record is held by Martina Navratilova, who was 47 when she won a match at Wimbledon in 2004.

Rory McIlroy, the world's best golfer, currently in Abu Dhabi, woke up at 3am to watch his girlfriend, Caroline Wozniacki, beat Sabine Lisicki.

"I think I've messed up his sleep a little bit," said the Dane. "That's a true fan. It's great to have that support. I know that he's there watching on TV or on the computer always."

Top seed Victoria Azarenka said she was not recognized by a security guard when she tried to enter the facility one day, until she pointed to her champion's portrait on the wall.

Azarenka was not the only famous face to fall foul of security, with Judy Murray asked to leave the press box on Court Three while watching Laura Robson because she had the wrong accreditation.

"How funny was that?" she said on Twitter. "Best seats in the house. Behind baseline + in the shade. And half empty. Gutted :-)"