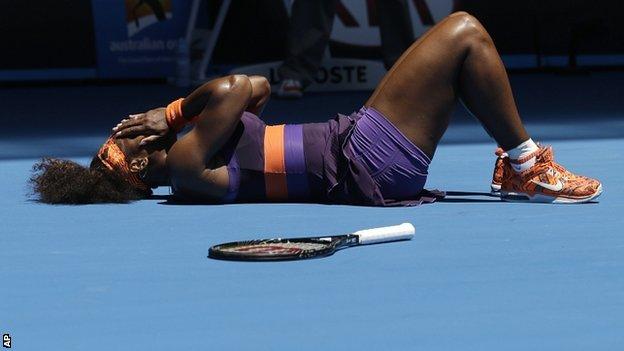 Serena Williams says she will fight through the pain after injuring her right ankle in her first round victory at the Australian Open.

Williams had medical treatment after slipping before recovering to beat Edina Gallovits-Hall 6-0 6-0.

"Unless something fatal happens to me, there's no way I'm not going to be competing," said the American, 31.

World number one and defending champion Victoria Azarenka declared herself fully fit after defeating Monica Niculescu 6-1 6-4 in her opening match.

The Belarusian, has recovered from the toe injury, which she blamed on a bad pedicure, that forced her out of her Brisbane International semi-final against Williams earlier his month.

After reaching round two in Melbourne, she said: "I couldn't wait to get out there and play. It's been a long week of preparation, so you always feel like a little bit overwhelmed before your first match.

"I am running without pain and am just trying to focus on the next two weeks."

Williams, who is targeting her sixth Australian Open title, was comfortably leading her Romanian opponent 4-0 when she reached for a forehand and landed heavily, twisting her ankle.

The American lay motionless and received lengthy medical attention and though she continued, Serena was clearly in pain as she went on to close out the match

When asked whether she would be fit to play her second round tie on Thursday against either Slovak Magdalena Rybarikova or Garbine Muguruza of Spain, Williams said: "Oh, I'll be there.

Serena at the Australian Open

"I'm alive. My heart's beating. I'll be fine. I've been injured before. I've played this tournament with so many injuries and was able to come off pretty on top.

"So for me it's just another page and a great story to tell the grandkids one day."

Williams said she would ice her foot and leave it to the medical team to decide whether she needed a scan - although she added she would rather not know if it was something serious.

"I know one year I won this tournament and had two bone bruises in both knees," said Williams, who has won 47 career titles.

"I had no idea. I just knew I was in pain. I think sometimes what you don't know cannot hurt you."

Williams is searching for her third successive Grand Slam victory, following success at Wimbledon and the US Open in 2012.