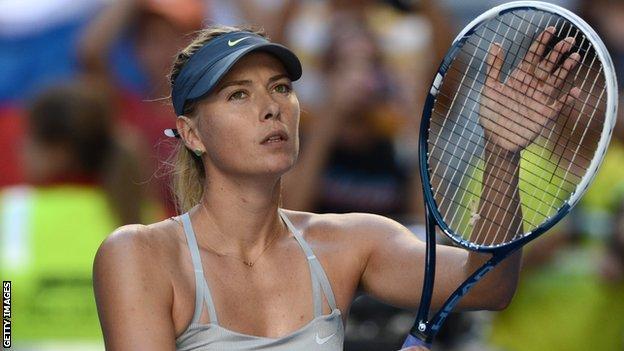 Maria Sharapova and Venus Williams will meet in a much-anticipated third-round clash at the Australian Open.

Sharapova racked up her second 6-0 6-0 victory of the week, this time against Japan's Misaki Doi, to reach the last 32.

And Williams saw off France's Alize Cornet 6-3 6-3 in the first of Wednesday's night matches.

Sharapova and Williams will meet for the eighth time on Friday, with the Russian winning four previous matches.

With five-time champion Serena Williams and defending champion Victoria Azarenka in the other half of the draw, the winner will be in a strong position to make the final.

Sharapova, who won the 2008 Australian Open, has made a sensational start to her campaign, taking 24 games without reply.

She first played Williams in 2004, and when asked about taking on the seven-time Grand Slam champion again, she said: "There are certainly no secrets coming in that match-up.

"We've played against each other many times. Despite the fact she might not be seeded high or didn't play for a little bit, she's still a very experienced player and a tremendous athlete."

Williams, 32, has slipped down the rankings in recent years due to injuries and ill health, but has returned from outside the top 100 at the end of 2011 to 26th in the world.

"I'm playing against Maria and I better bring my best game against her," she said.

"I'm fighting the wrinkles and the battle of the bulge and everything but I'm still thin and trim."