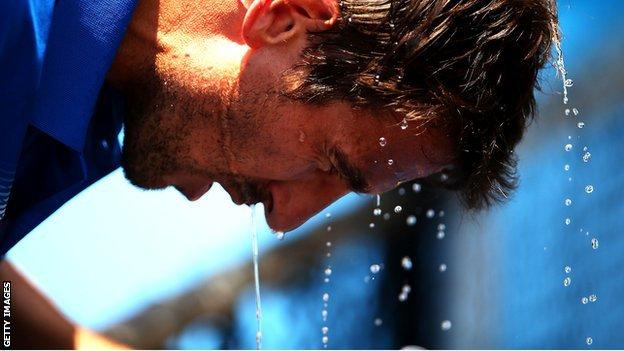 Amid the snow and ice of a British January, it's difficult to imagine tennis players at the Australian Open battling with 40C temperatures.

But that's exactly what meteorologists expect to happen on Thursday.

Australia has been experiencing one of its strongest ever heatwaves, with bushfires in parts of New South Wales, Victoria and Tasmania.

While the weather has cooled in Melbourne since Monday, come the end of the week Andy Murray, Roger Federer and Laura Robson could all be stepping out to play in Melbourne in searing heat.

Simon King, BBC Radio 5 live weatherman, says: "How hot it is on a daily basis depends on the wind direction. It looks like tomorrow could turn hot again."

So how will players cope with the extreme conditions? BBC Sport asks former players, sports scientists and coaches for their views.

Temperatures at the Australian Open can get as high as 46C - much hotter than the French Open which has an average of 20C, the US Open (26C) and, as you would expect, Wimbledon (22C).

Although this year's Australian Open has been below the 26C average, temperatures on Thursday are set to climb to 40C - and that's just in the shade.

While rain may stop play at Wimbledon, at the Australian Open it's the heat that may cause officials to close the roofs on its two temperature-controlled stadia, the Rod Laver Arena and the Hisense Arena.

Both the Australian and U.S. Opens operate an Extreme Heat Policy, based on a measurement known as the Wet Bulb Globe Temperature, which takes humidity into account.

The effects of playing tennis in the heat

One of the hottest matches on record was the 2002 women's singles final. After being a set and 4-0 up, with four match points, Martina Hingis lost to Jennifer Capriati.

Hingis says she found the conditions draining. "It's the legs that stop functioning. The brain still wants it, you want to run and you want to get to the ball and play, but you feel like your body can't cope with what your brain tells it to do."

It's not just tennis players who are affected by the high temperatures on the courts. Tennis coach Mark Taylor, who has watched the tournament from the stands says he's seen fans pass out in the heat.

"It's important for fans, as well as players, to stay hydrated," he says.

"Avoid alcohol, as it dehydrates the body," she says. Other tips include taking cool, damp flannels in a plastic bag to help cool your face and wearing light, cotton clothing, a hat and plenty of suncream.

"Playing in the heat is highly stressful for the body," says Dr Glyn Howatson, an exercise physiologist from Northumbria University. "I imagine players will be coming off the courts a couple of kilograms lighter than when they went out."

He believes players' core temperatures could rise to around 40C. "For most normal people you'd be close to being in hospital, but Andy Murray will be acclimatised," he says. "He'll have given his body the best possible chance of playing in these inhospitable conditions."

Towards the end of five-set matches, players' reaction times may slow by up to a quarter of a second.

"Your judgement will go, to a certain extent," says professor Clyde Williams, a sports scientist at Loughborough University who has worked in Melbourne.

"There's no space for error and these kind of conditions have a huge impact on who wins matches." He says players should focus on cooling down the body before the match and take ice-packs on court.

As the players slow down, the balls get faster in the heat. "They bounce higher and fly quicker," says Mark Taylor, head coach of the performance academy at Nottingham. "Players will have their racquets strung slightly tighter to try to get more control of the ball."

In addition, says Taylor, the soft rubber on their shoes may stick to the courts. "You tend to trip a bit more," says Taylor.

How to play tennis in the Australian climate

For the players, preparation is key.

Murray says: "For a majority of the day, it's going to be tough conditions to play in and I need to be ready for it."

"I think it's going to be tough for everyone on Thursday but you've just got to try to get through it," adds Robson. "There are going to be some iced towels on court for sure. I'll just have to try to hydrate as much as possible."

Tennis, whatever the weather

Robson has played in high temperatures before. At the Hobart International, in Tasmania, temperatures got up to 42C. "The wind there was like a hairdryer in my face, so hopefully it won't be that bad," she says.

Both Murray and Robson draw some comfort from the fact their opponents - not to mention their half of the draw - will be in the same situation. The heat has been known to impact even the best players.

During the 2009 Australian Open, the warmest on record, defending champion Novak Djokovic pulled out of the quarter-final against Andy Roddick, apparently because of the heat. And Victoria Azarenka collapsed at the 2010 U.S. Open, one of the hottest on record, following a fall sustained before the match.

Nick Weal, the men's head coach at the Lawn Tennis Association, says Murray's pre-season training regime in Miami will help him. "These guys have been playing in the heat a lot over the last few years, so they know what it's like. I think if you came from an English winter and hadn't seen the sun, that would be pretty much impossible."

Science also helps. Players have fitness trainers and physios to oversee their recovery and make sure they take on carbohydrate gels and solutions during the matches and recovery shakes afterwards. Once the body returns to normal temperature, they will have an ice bath to aid recovery.

Weal adds: "There won't be one player here who loves it but they're all conditioned for it, there are hydration products out there and they know what they're doing. Obviously, if they don't stay hydrated they're in serious trouble, but they're all pretty clued up."

Tennis in the heat: The long-term outlook

Fortunately for the players, after the extreme heat tomorrow it's expected temperatures will cool again by the weekend.

Weatherman Simon King says: "You might get that spike on Thursday but it's only short-lived. By Friday temperatures will be back down to 28C."

Tournament director Craig Tiley says: "The long-term forecast is looking very good. There will be some warmer days - that's why we have the roof. We can manage it with the roof so play can continue."